Banning of political events in Plaza Independencia: A solution or an excuse? 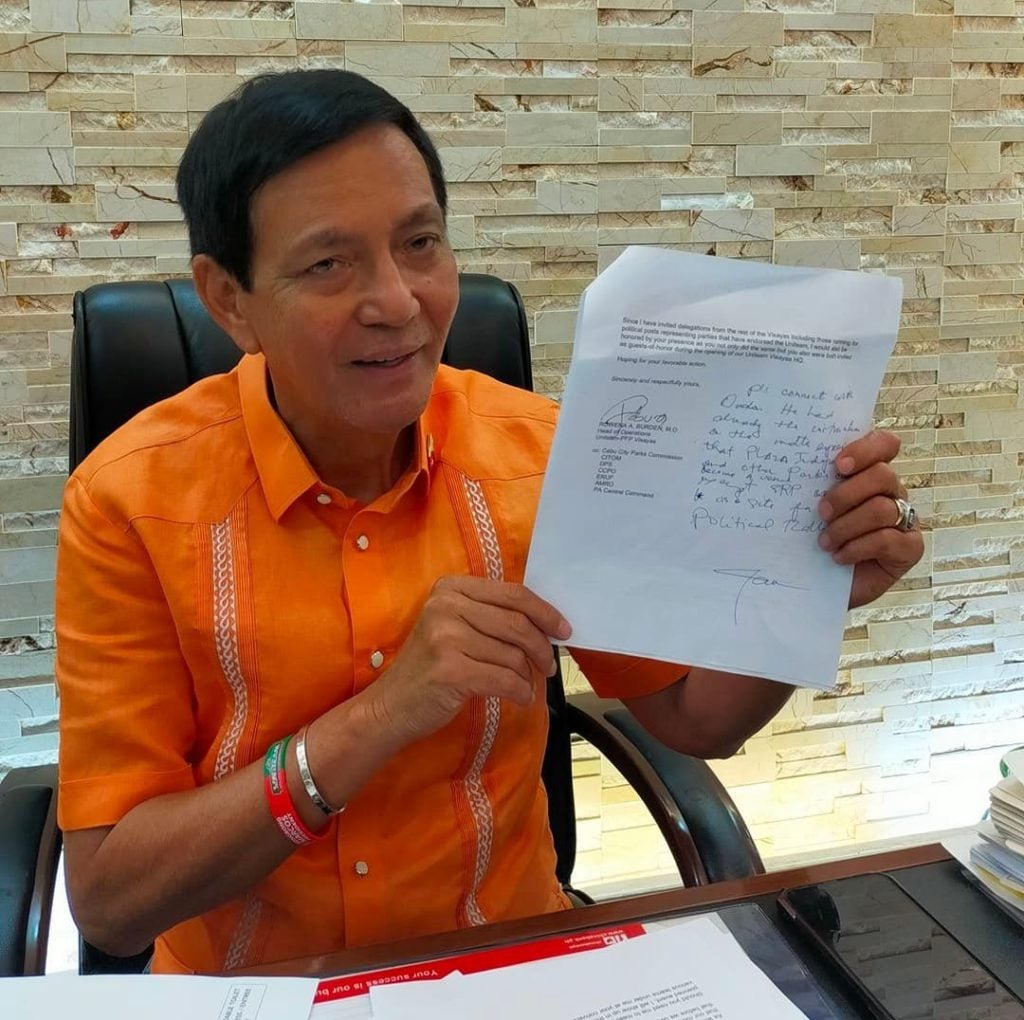 Cebu City Mayor Michael Rama shows a document purportedly supporting his claim that he also turned down the request of other parties to hold their political events at the Plaza Independencia.| Delta Letigio

CEBU CITY, Philippines — Plaza Independencia or Independence Park is among the civic spaces in Cebu City where the public can freely conduct activities.

It is one, if not the largest park in the city and has hosted various events on a yearly basis. It is also used by all sectors from religious groups to cause-oriented groups and even political parties.

On Tuesday, April 19, 2022, Mayor Michael Rama said that he has turned down all requests for political rallies in the Plaza Independencia, Fuente Osmeña Circle, and other civic parks because he wants all political related events to be held at the South Road Properties.

This was his excuse for turning down the Cebu Youth Central Hub, a group of supporters of the Leni-Kiko tandem who requested to use the Plaza as a starting spot for their Fun Walk or Pinkhimamat on April 9, 2022.

The group has issued a statement saying that the city government has been partisan in issuing permits to the opposition camp since Rama and Barug PDP Laban are allied with the BBM-Sara tandem.

The city government allowed the supporters of BBM-Sara to use the Plaza as the end venue for its Unity Walk on April 17, 2022.

Rama said it was a misunderstanding and apologized to the youth group since the group should have been granted the permit because the Pinkhimamat was not entirely political considering that no candidate was present during the said event.

The mayor said that after the Arat Na Cebu concert on March 28, 2022, he has decided that the CCSC and the Plaza Independencia should not hold such large events due to the risk of stampede and transmission of COVID-19.

It must be noted that the BBM-Sara Unity Walk occurred way long after this decision by the mayor, but he explained that the Unity Walk was not a political event sans the political candidates.

Rama also denied that he refused the Leni-Kiko camp to use the Cebu City Sports Center (CCSC) on February 24, 2022, saying that it took time for the paperwork to reach him and by the time he was about to say yes, the organizers have chosen Southwestern University.

To show his non-partisanship, Rama showed a letter from the BBM-Sara supporters in Cebu that he personally denied and referred to Vice Mayor Donaldo Hontiveros.

In the letter, Rama made a note that Plaza Independencia and other civic spaces cannot be used to hold political events and all events must be conducted at the South Road Properties.

His refusal was the reason why the UniTeam Festival was held at the SRP, an event that drew 300,000 individuals by police estimates.

The “excuse” did not sit well with Leni-Kiko supporters online saying that the mayor clearly “favored” the BBM-Sara political events.

“The city’s main plaza is off-limits for political rallies? That simply doesn’t make sense. Could you imagine political rallies being banned at Plaza Miranda in Manila? No, right? Maybe it makes sense only in the mayor’s mind.”

“Any attempt to curtail the people’s right to assembly must be scrutinized. Sometimes, our local leaders have to be reminded that no right is more sacred than the right of our people to express their political leanings wherever and whenever practicable,” he said in a text message.

A mirror of the past

In his press conference, Rama noted that when he and Labella ran in tandem in the 2019 elections, during the term of former Mayor Tomas Osmeña, they were barred from using the CCSC for their political rally.

They ended up holding their meeting de avance on the streets at Barangay San Nicolas.

However, it must be noted that Barug PDP Laban was able to use the Plaza Independencia twice in the 2019 elections: first during Osmeña Day, and the second, during the proclamation rally with President Rodrigo Duterte.

Rama said he does not want to dwell in the past and added that his decision now is the best option considering the ongoing pandemic.

He believes that big crowd-gathering activities should now all be held at the SRP.    /rcg