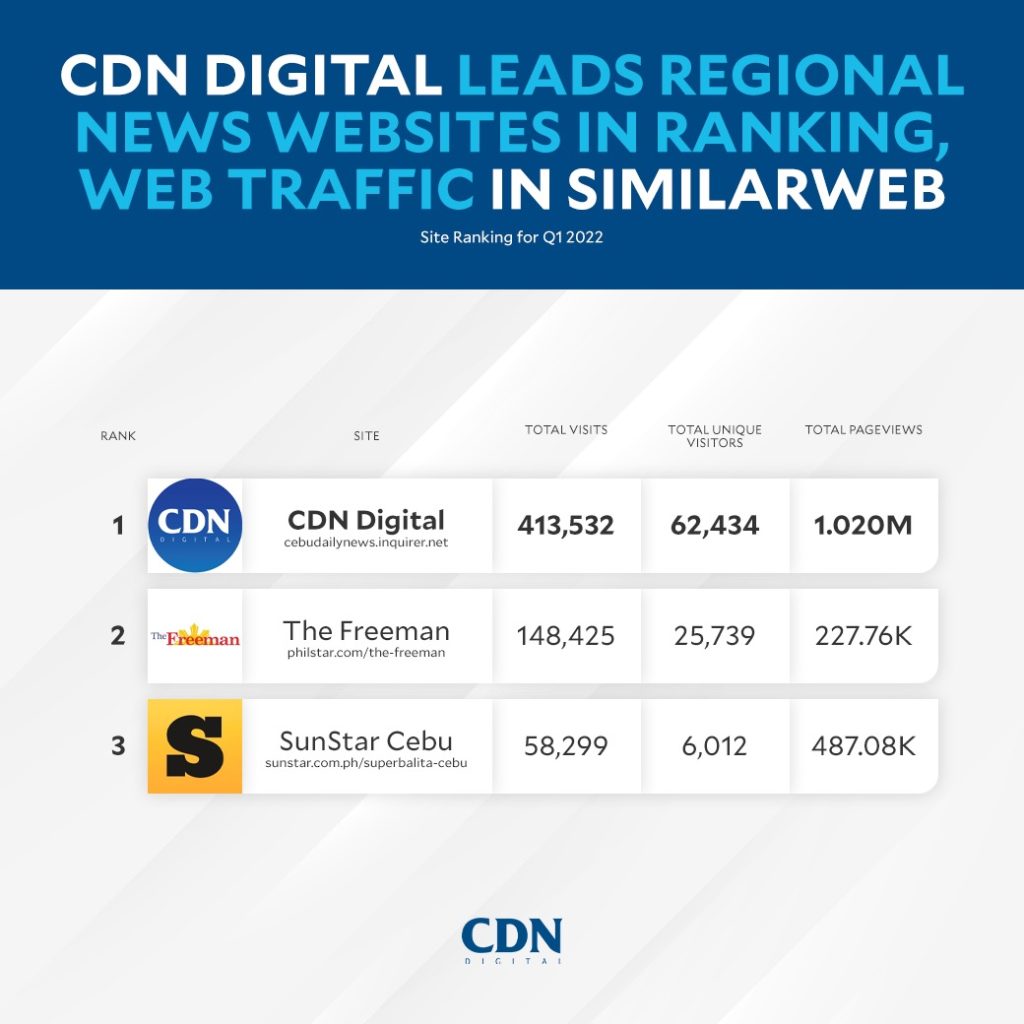 CDN Digital topped two other Cebu-based news organizations in terms of web traffic as it generated 1,020,000 pageviews and 413,432 site visits for the first quarter of 2022, according to a recent report from web analytics provider SimilarWeb.

After breaching the 1-million mark in terms of web traffic, the INQUIRER.net affiliate has positioned itself ahead of the competition.

CDN is using Similarweb which is the official measuring tool for website ranking which its parent website, Inquirer.net migrated to in January this year for accurate and objective web analysis.

This move was decided since Alexa Internet is set to cease operating by May 1, 2022.

Inquirer Interactive Inc. chairperson and president Paolo R. Prieto also said the decision to tap Similarweb was due to INQUIRER.net’s desire to stay on top.

“The decision to switch to Similarweb is a necessity with the impending closure of Alexa. Alexa has served our needs for years, in particular with its ranking which is a globally accepted measuring stick for our online traffic versus competitors,” Prieto said in a statement.

“In seeking out a replacement, we looked for two things. First, a globally accepted ranking that would be accepted by our stakeholders. Second, we wanted an innovative technology partner that would help us improve our insights and analytics as we seek to stay on top of the news publishing industry in the Philippines,” he added.

Based on data from Crowdtangle, Meta’s social monitoring platform, CDN’s Facebook page still has the highest number of followers among all Cebu-based news outlets and blogs in 2021, with a following base of 2,419,113 as of April 27.

It also posted the highest total Facebook interactions recorded in the previous year, with 25.38 million interactions. These figures, in turn, helped CDN’s page grow by 16.39 percent.

Joining CDN in the top three Cebu-based Facebook pages with the most interactions included leisure and travel site Sugbo.ph with 12.03 million, and SunStar Superbalita Cebu at 10.50 million.

CrowdTangle’s report further showed that CDN has been consistently part of the top three news sites and organizations with the most number of followers and engagements on Instagram, also a Meta-owned platform.

With 31,659 followers, CDN ranked second on Instagram, next to Sugbo.ph. For 2021, it managed to grow its Instagram interactions and followers by a combined total of 29.5 percent.

Last October 2021, CDN decided to expand its presence in the social media sphere by launching its official TikTok account. Two months later, its number of TikTok followers has already reached 16,932.

In 2019, CDN migrated its entire operations to the internet, and was since rebranded to CDN Digital.

Cebu among 50 Best Islands in the World