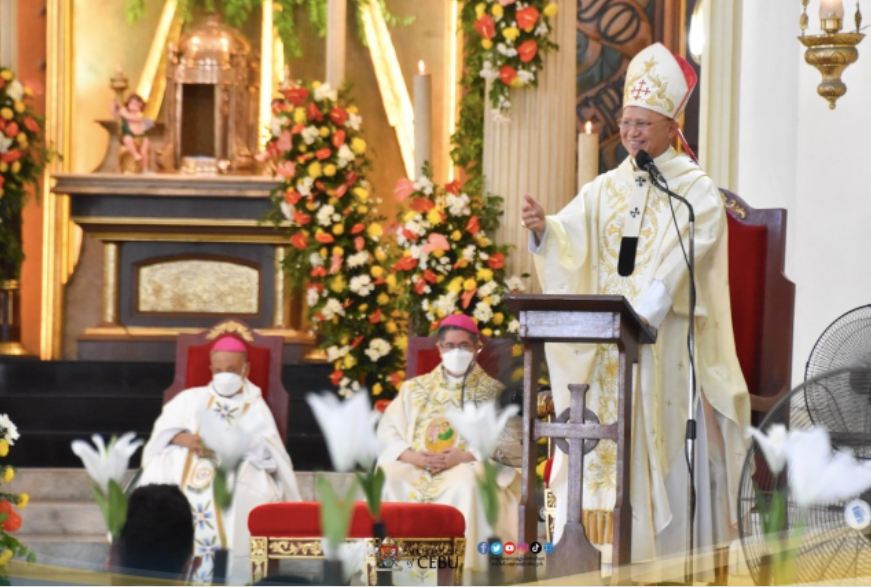 Cebu Archbishop Jose Palma encourages voters to vote wisely and choose leaders with a proven track record of helping the poor during his homily at the Mass celebrating the feast of the patron saint of Mandaue City, St. Joseph. | Photo courtesy of the Archdiocese of Cebu

LAPU-LAPU CITY, Philippines — Cebu Archbishop Jose Palma is asking voters to consider a lot of things when choosing the country’s next leaders such as character, achievements, competence, track record, and programs, especially for the poor.

In his homily during the Mandaue fiesta Mass on Sunday, May 8, at the National Shrine of St. Joseph in Mandaue City, Palma also urged all Catholics to pray before casting their votes on May 9.

At 6 a.m. on Monday, when all polling centers would be opened, Palma said, church bells would be sounded to remind voters of the importance of Election Day.

He said churches would also be opened tomorrow for those who would want to pray at the parishes.

He is encouraging the faithful to pray for clean, honest, and peaceful elections.

Palma is encouraging them to pray that the exercise of suffrage would benefit and improve the lives of everyone.

(If who will be reflected in our minds, that will become the pictures of good leaders because they are the ones who would guide us…Look for the track record, this is what our conscience dictates.)

“As we decide the future of our city and the entire nation I urge my fellow mandauehanons to show up and vote.

“By practicing our right to suffrage, let us all be the change we want to see in the world!

“I pray that we all have clean and safe elections tomorrow,” Cortes said in his Mandaue fiesta message to the Mandauehanons.

Elections in a pandemic: Registered voters only need to wear face mask

Pagasa: Bring umbrella, fan, water when you vote on May 9

Alert Level 1 in Metro Manila, 88 other areas until May 15

Read Next
Elections in a pandemic: Registered voters only need to wear face mask