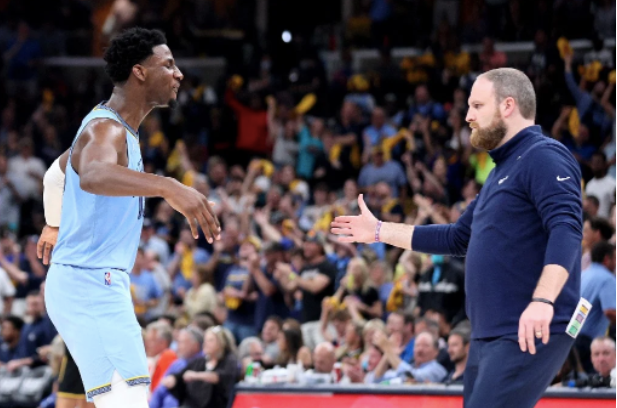 Jaren Jackson Jr. #13 of the Memphis Grizzlies celebrates a basket with head coach Taylor Jenkins against the Golden State Warriors during the third quarter in Game Five of the 2022 NBA Playoffs Western Conference Semifinals at FedExForum on May 11, 2022 in Memphis, Tennessee. Andy Lyons/Getty Images/AFP

The Grizzlies had little trouble cutting Golden State’s series lead to 3-2 despite playing without star point guard Ja Morant for the second straight game. Morant has a bone bruise in his right knee and is doubtful to play again this postseason.

Steven Adams collected 13 rebounds, Jones compiled nine assists and Jackson grabbed eight boards for second-seeded Memphis, which led by as many as 55 points. The 39-point margin of victory is the Grizzlies’ largest in postseason play, topping a 124-96 win over the Minnesota Timberwolves earlier this postseason.

Golden State committed 22 turnovers while the Grizzlies had 10. Memphis made a franchise playoff record 18 3-pointers (out of 41 attempts).

Memphis led 77-50 at halftime and then poured it on by outscoring Golden State 42-17 in the third quarter.

A four-point play by Williams increased the lead to 55 with 40 seconds left in the third period. The Grizzlies held a 119-67 lead entering the final stanza, and both teams played reserves over the final 12 minutes.

Warriors forward Otto Porter Jr. missed the second half due to right foot soreness. Golden State shot 45 percent from the field and made 14 of 39 from 3-point range.

Golden State trailed 29-28 after Thompson’s trey with 1:21 left in the first quarter before the Memphis onslaught kicked into high gear.

The Grizzlies scored the next 11 points to lead by 12 after Kyle Anderson’s basket 37 seconds into the second quarter. Memphis used a 9-0 run to increase its lead to 53-36 and later tallied 14 straight to raise the margin to 25 with 1:49 left.

Jones’ basket made it 77-50 entering the break.