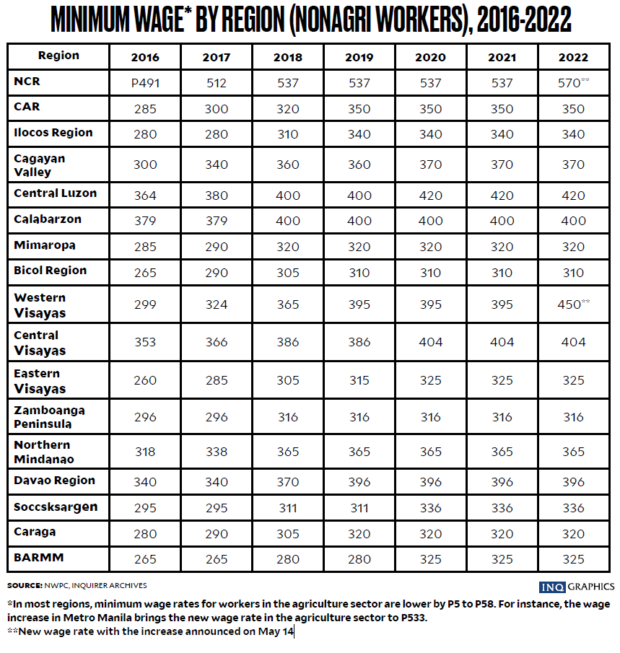 MANILA, Philippines — The daily minimum wage in Metro Manila has been raised by P33, and by P55 to P110 in the Western Visayas region, the Department of Labor and Employment (DOLE) announced on Saturday.

Labor groups described the increase as a mere pittance, but small business establishments expected the wage hike to be as devastating as a “supertyphoon.”

The National Capital Region (NCR) wage board on Friday set the minimum daily wage at P570, up from the current P537, Dole said.

The Western Visayas Regional Tripartite Wages and Productivity Board on Thursday raised the daily minimum wage of workers in private establishments with more than 10 employees to P450 daily from the current P395, according to Dole Regional Director Sixto Rodriguez Jr.

“Kasambahays,” or domestic workers, will now get P4,500 per month from P4,000 currently, Rodriguez said.

But despite the more than three years it took to get a wage hike, the increase was still “a victory for workers,” Labog said.There are at least 1 million minimum wage earners in private establishments in Metro Manila, according to Dole.

Labor group Sentro said the P33 increase was “a pittance and woefully inadequate.”

“It is not even enough to allow workers to recover the lost value of their wages,” it said.

Sentro cited the admission by the National Wages and Productivity Commission (NWPC) that since February this year, real wage had been eroded by P43 by inflation, which climbed to 4.4 percent in Metro Manila and 5.1 percent outside the capital region in April.

In a statement, Trade Union Congress of the Philippines (TUCP) president Raymond Mendoza called the wage hike “ridiculously low and unfair to workers” who are living below the poverty threshold.

The TUCP called for the amendment of the 33-year-old Wage Rationalization Act “to finally end the government’s wage depression policy.”

Labog, a senatorial candidate, said Congress should prioritize the passage of a national daily minimum wage of P750.

The presidential candidate and chair of the labor group Bukluran ng Manggagawang Pilipino, Leody de Guzman, denounced the “loose change” given by the wage boards and also pushed for a P750 daily minimum wage.

“The P750 national minimum wage was already low for the ‘daily cost of living’ which reaches over P1,000 a day based on the ‘living wage’ stated in the Constitution,” he said.

The increase in the daily minimum wage will benefit not only workers because stronger purchasing power will also boost earnings by small business owners., De Guzman said.

Wage hikes should apply to everyone, he added.

“The rise in prices of basic commodities is across the board, why is it that minimum wage earners are the only ones who would get a wage hike?” he said. The wage orders still have to be submitted to the NWPC for review and approval. They will take effect 15 days after publication in a newspaper of mass circulation.

“The increase considered the restoration of the purchasing power of minimum wage earners because of the escalating prices of basic goods, commodities, and petroleum products as well as to bring the minimum wage rate above the 2021 first semester poverty threshold,” Dole said in a statement.

Businessmen in Western Visayas are appealing to defer the wage increase because they have not yet recovered from the economic crisis caused by the pandemic.

“It’s like being hit by a supertyphoon. Very few businesses can afford it. It would be very difficult for small businesses to get back on their feet,” he said.

“The timing (of the wage increase) is wrong. This will further slow down our economic recovery,” he added.

According to Carbon, the pandemic resulted in massive business closures, loss of jobs and few customers.

“We are not yet out of the woods. We are in the middle of a perfect storm. Our recovery is just starting,” Carbon said.

Sergio Ortiz-Luis Jr., president of the Employers Confederation of the Philippines, said his group was asking for an exemption from the wage increase for micro-enterprises. “I think big companies can take this. But the [micro enterprises], I don’t know if they would be discouraged from expanding,” he said.

It said there were 2.5 million employed by micro-enterprises in 2020, or a little over 29 percent of the entire workforce under micro, small and medium-sized enterprises. —WITH REPORTS FROM CARLA GOMEZ, ROY STEPHEN C. CANIVEL AND DEMPSEY REYES

Read Next
A Marcos government and the pink movement