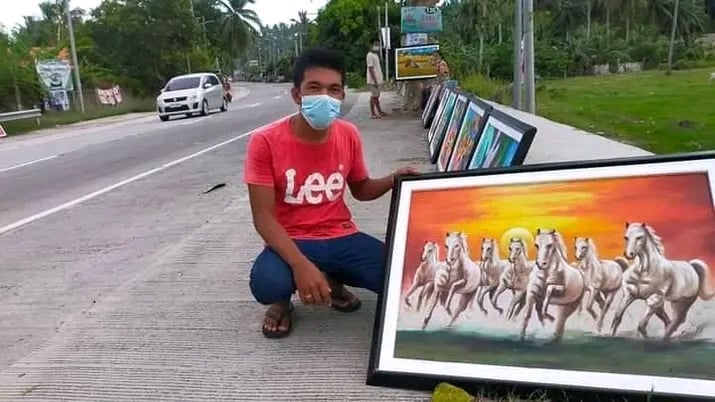 One of self-taught painter Arnel Salvacion’s helpers show one of the the painter’s paintings displayed on the roadside in a town in northern Cebu. | Photo courtesy of MyTV Cebu

CEBU CITY, Philippines — From displaying his paintings on the roadside of various areas in the northern part of Cebu province, self-taught and full time Cebuano painter Arnel Salvacion now exhibits some of his artworks in the roadsides of Cebu City.

Salvacion, 52, is the gifted painter behind the roadside art gallery in Sogod town in northern Cebu, which trended online earlier this year and the painting pieces, mostly about nature, displayed along R. Duterte in Banawa, Cebu for about a month now.

Read: The artist behind the roadside art gallery in Sogod

His roadside gallery of oil paintings on canvass in the City has definitely caught the attention of Cebuanos and netizens.

(The market in the province has been slow and so I thought about perhaps it might be better to try Cebu City.)

He said the idea of exhibiting his paintings for sale in Cebu City stemmed from an invite of a hotel located in Nivel Hills, along Cebu Veterans Drive to display his works in its parking lot. Someone from the hotel, he said, happened to notice their roadside painting display in Sogod.

They also used to display paintings in the roadsides of Balamban in western Cebu and in his hometown Tuburan in northwestern Cebu. 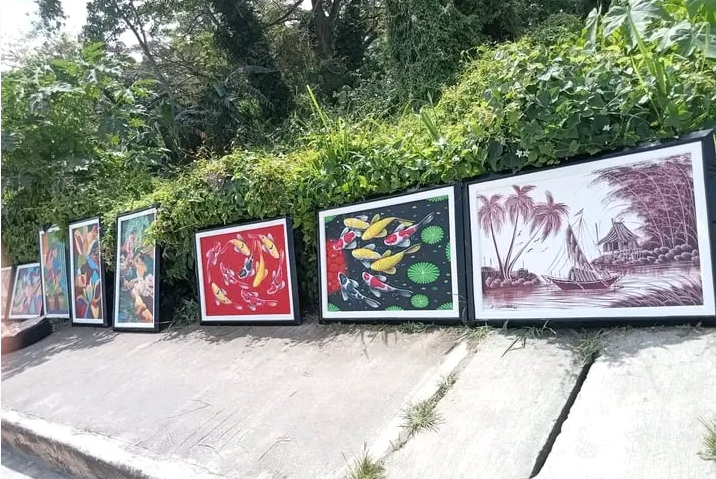 Arnel Salvacion displays his artworks at the roadsides in some towns and city in northern Cebu such as Bogo, Catmon and Sogod. | Photo courtesy of MyTV Cebu

Salvacion through the help of his brother-in-law, Azer Tumagna, display his artworks in the hotel every Saturday and in Banawa between Wednesday until Friday for almost a month now, or since last April.

He said he began displaying his artworks on the roadside because of COVID-19 pandemic.

He said the lockdown made him decide to display his works on the roadside, as authorities had limited mobilization when Cebu was first placed under lockdown in 2020.

For an artist and a father like him who heavily rely in going from one office or house to another to market his works, the lockdown has greatly affected his source of income.

Salvacion had no formal education in painting. 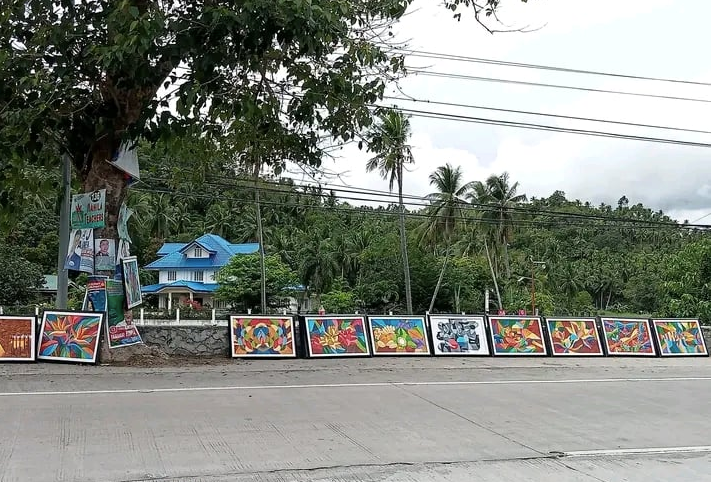 He said he started painting at the age of 22 and his primary interest for a subject was nature as he was fascinated by it.

Before painting professionally and eventually opening a painting business, he also worked as a construction worker.

At the age of 16, he said, he worked as a helper in one of the painting businesses in Cebu where he used to just prepare or paint the canvasses with white.

(I already loved art even if the pay is small, I stayed longer there because I wanted to learn. Since elementary, I already loved art but I did not join art contests because I could not … even a crayon I could hardly buy one. My classmate will just give me his used crayons.)

After about six years of working as a helper in a painting business, he said he learned the techniques in painting and decided to quit from his job.

He then ventured into his own painting business as he also had improved his skill in painting.

(I got an idea on how to market the paintings from them because I am a shy person before. My boss told me not to be shy or to be ashamed of what we are doing because we are not stealing. We are just having a livelihood.) 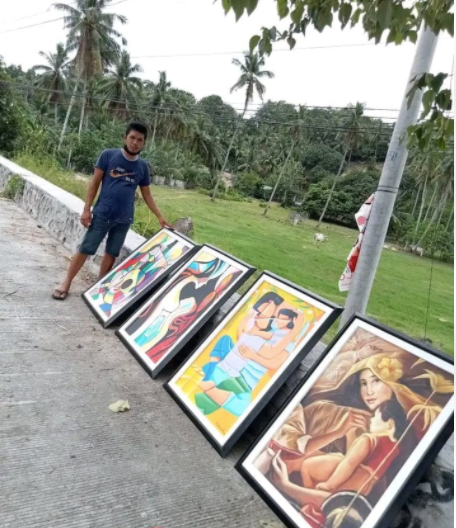 Artist Arnel Salvacion started his painting business with P4,000 in his pocket. In photo is one of his helpers selling the artist’s paintings at the roadside.| Photo courtesy of MyTV Cebu

The P4,000 he had was used to purchase his very first canvass, paint and other painting materials.

The self-taught painter recalled he sold his painting for only P500 apiece many years ago. Now, his regular 24 by 36 inches painting could cost P2,800 and more depending on the design and special requests of his clients.

He admitted that displaying his works on the roadside had greatly improved his business. On a regular day, he said, they could display at least 20 paintings for sale in Banawa in Cebu City. And on a lucky day, they can sell 10 paintings at most.

Though the main theme of his artwork when he started was nature, he said, he started venturing into abstract painting in 2015.

As his painting business slowly expanded, he said he was able to at least train and hire some of their neighbors and relatives who were also determined to learn and improve in the craft of painting.

Salvacion said they are the ones, who mostly cater to the abstract painting requests of clients.

He said he was also happy and proud that he was seeing potential and interest in painting in his six children.

As of now, the self-taught painter admitted he was determined to continue displaying his artworks on the roadside as long as it would be allowed.

He also said he was also willing to cooperate with authorities should he be asked to comply with any requirements to let him continue selling his artworks in the roadsides.

(They should not be discouraged. Just continue to sell because there are days that we don’t have any sales.)

He also advised them to keep on practicing to improve their craft, citing an example on what he did to improve his painting skills and on the theme of his paintings.

(If I can see a good view, I will take a picture of it and I will improve whatever is lacking so that it will become more beautiful to the eyes.)

Love for art: Cebuano artist uses talent to be voice of others