Martial law should be ‘open to debate’ – incoming press chief 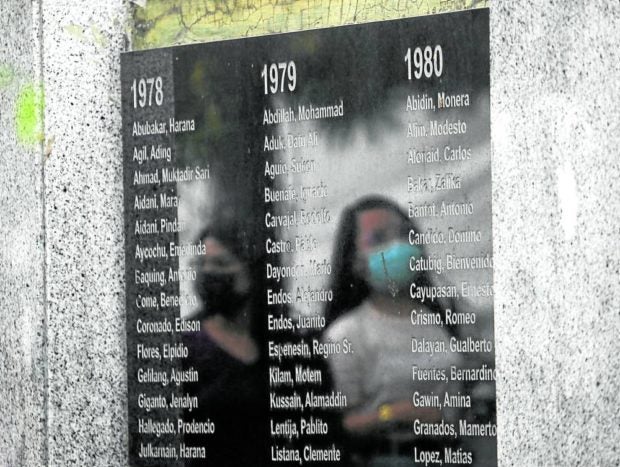 ETCHED IN STONE | A martial law memorial in Manila, behind the Bonifacio Shrine next to City Hall, honors the activists who were jailed, tortured, or killed under the dictatorship of Ferdinand Marcos Sr. According to Amnesty International, 72,000 were imprisoned, 34,000 were tortured and 3,240 were killed during his two decades in power. (File photo by LYN RILLON / Philippine Daily Inquirer)

MANILA, Philippines — Amid public fears that the return of the Marcos family to Malacañang would lead to historical distortion, the newly appointed press secretary, Trixie Cruz Angeles, thinks that the martial law period should be “open to debate.”

Angeles said on Tuesday that questioning historical events or even established facts should not be prohibited, including the martial rule of the late ousted dictator Ferdinand Marcos, the father of President-elect Ferdinand Marcos Jr.

“Some ideas need discourse, some ideas are open to investigation,” the lawyer-vlogger, who last week was also named the next chief of the Presidential Communications Operations Office, said in an interview over radio dzMM.

“Some ideas are supported, certain ideas can always be questioned. But it doesn’t mean that they will come up with a different conclusion,” she said.

When told that the martial law era was “well-documented,” including court rulings affirming widespread abuse of human rights as well as corruption, Angeles said: “That’s a minefield by itself.”

When asked if the public should still debate “unassailable facts,” Angeles said: “I think that everything should always be open to debate.”

“Even scientific theories and even established facts are always open to question,” she said. “I’m not saying that just because we open it to question, a different result will come out of it.”

The lawyer-vlogger pointed out that the lack of discourse on key issues had led to the spread of misinformation and disinformation.

For Angeles, “free speech doesn’t imply that there is a need to come up with a resolution every time.”

“Sometimes, free speech is just an expression, and sometimes that expression involves a question,” she said.

“Does it mean that we stop those people from asking questions if we think that the result is something we are not ready to accept, or is in fact even wrong? Do we stop the discourse because people may come up with the wrong conclusion?” she said.

Under Marcos Sr.’s martial rule, including his two decades in power, 72,000 were imprisoned, 34,000 were tortured, and 3,240 were killed, according to Amnesty International. The global rights organization made two visits to the Philippines—in 1971 and in 1981.

After the dictatorship was toppled in February 1986, succeeding administrations recovered more than $600 million in secret Swiss bank accounts, as well as other assets that, the Supreme Court has ruled, were illegally amassed by the Marcos family.

During the election campaign, Tsek.ph, an academe-led fact-checking initiative, found that Marcos Jr. was the beneficiary of “positive but misleading” messages on social media, and that his strongest rival, Vice President Leni Robredo, was the “biggest victim” of disinformation.