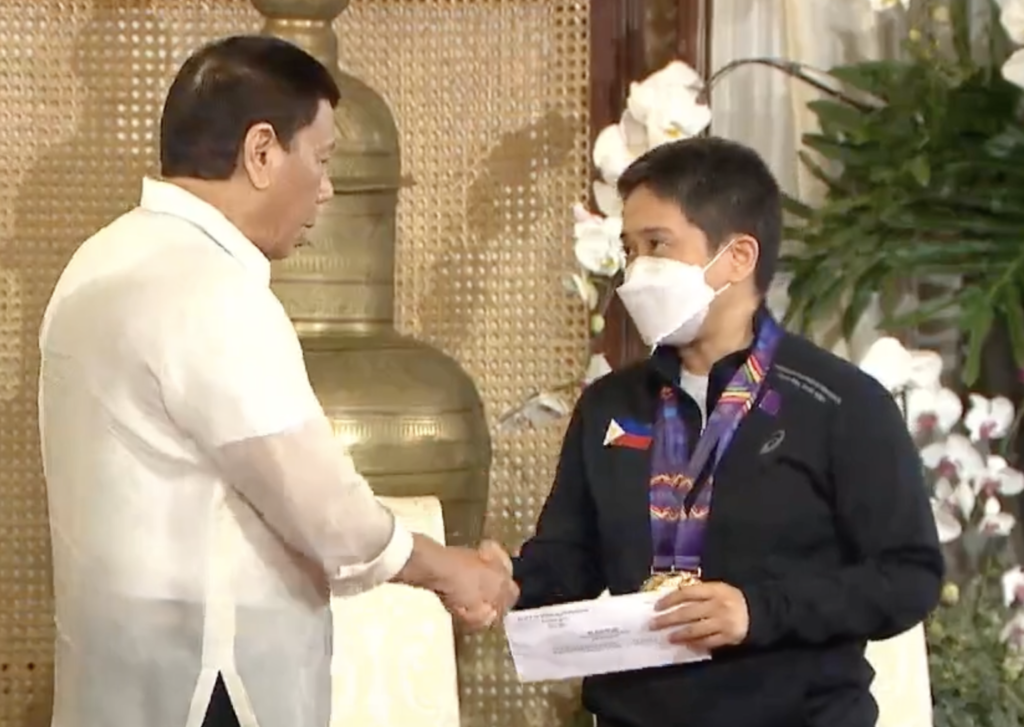 This was announced on Wednesday, June 1, 2022, through the Philippine Sports Commission (PSC).

“President Duterte was very pleased by the performance of our athletes in the last Vietnam SEA Games and doubling their incentives is his way of recognizing and showing his appreciation for their efforts,” PSC Chairman William Ramirez was quoted in a press release sent to the media.

Ramirez led the courtesy call of the Philippine contingent at Malacanang Tuesday evening, May 31.

“Please know that I really recognize all the tedious preparations you have made to perform your best in this regional sports competition. Just like a father to every Filipino, I am very proud of you,” Duterte told athletes, coaches and sports officials present at the reception held at the Rizal Hall.

“I wish you all a good life para sa ginawa ninyo sa bayan. I would like to say to all of you, maraming, maraming salamat.”

Duterte has been known to be generous to Filipino athletes.

In the 2019 SEA Games, he also provided additional cash incentives for the Filipino athletes on top of the Republic Act No. 10699, which entitled the medalists corresponding cash incentives on the medal they won.

The Philippines finished fourth in the biennial meet with 52 gold medals, 70 silvers, and 105 bronze medals.

Gymnast Carlos Yulo is expected to receive P1.6 million for bagging five gold medals and two silvers in the Vietnam SEA Games. With Duterte doubling the incentives, he is going to get a whopping P3.2-million.

In addition, dancesport duo of Ana Nualla and Sean Aranar, who finished with three gold medals, will receive P1.8 million each while triathlon star, Kim Mangrobang, who bagged two gold medals in the triathlon and duathlon events, will receive P1.2 million just like Cebu’s billiards star Rubilen Amit, who topped the 9-ball and 10-ball competitions.

Aside from the bonuses, Duterte also awarded the Order of Lapu-Lapu with the rank of Kamagi to several medalists who weren’t able to receive it in the 2019 SEA Games.

Billiards legend Efren “Bata” Reyes was among those who received the award.