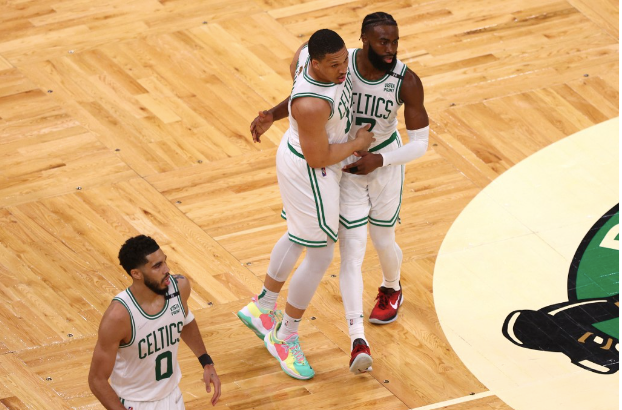 Grant Williams #12 of the Boston Celtics celebrates his three point basket with teammate Jaylen Brown #7 in the third quarter against the Golden State Warriors during Game Three of the 2022 NBA Finals at TD Garden on June 08, 2022 in Boston, Massachusetts. Elsa/Getty Images/AFP

Jaylen Brown scored 27 points and Jayson Tatum added 26 to propel the Boston Celtics to a 116-100 victory over the Golden State Warriors on Wednesday and a 2-1 lead in the NBA Finals.

Marcus Smart added 24 points for the Celtics, who led by as many as 18 in the first half at TD Garden.

They weathered another third-quarter surge from the Warriors, who briefly took a one-point lead only for the Celtics to pull away late for the convincing win.