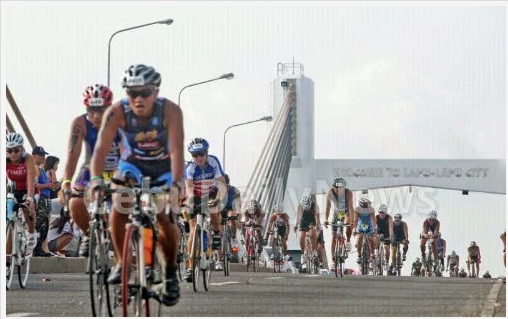 Ironman participants pass through the Marcelo Fernan Bridge during the bike leg of the competition in this 2012 photo. When the event returns this August after a two-year hiatus, bikers will have the chance to cross the iconic CCLEX. |CDN file photo

Mayor Junard “Ahong” Chan, however, said that currently, they cannot do anything about this, since these were projects implemented by outgoing lone district Representative Paz Radaza, through the Department of Public Works and Highways (DPWH).

Aside from this, works on some road and drainage projects were also suspended by the DPWH due to erring contractors.

Chan said that after June 30, he will be asking his wife, congresswoman-elect Cindi Chan, to conduct ocular inspections and look into the delay of the road works.

The mayor added that he will also meet with the DPWH to inquire about the timeline of the different road projects implemented in the city.

Chan said that he would also be asking for the assistance of DPWH in pressuring contractors to fast-track their work by rendering extra time in order to meet the deadline of these projects.

The Ironman triathlon consists of three sports disciplines: swimming, biking, and running. It was suspended for two years due to Coronavirus Disease 2019 (COVID-19).    /rcg