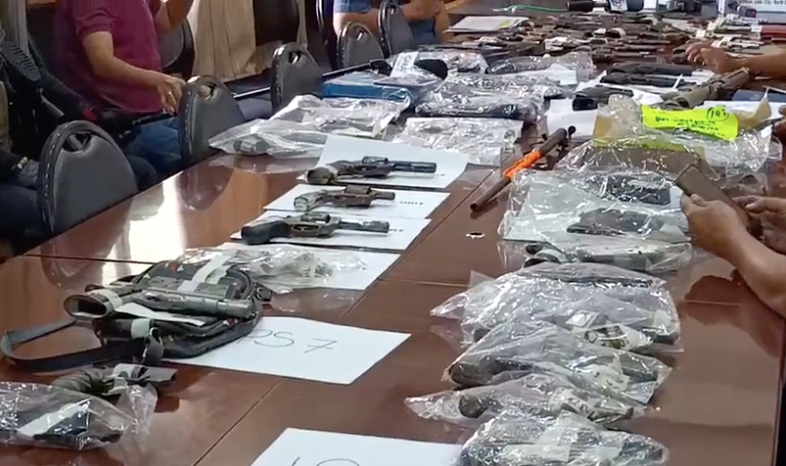 Some of the firearms were confiscated and surrendered from January 9 to June 8, 2022, in Cebu City. | Sotero Cabahug

CEBU CITY, Philippines — A total of 134 licensed and unlicensed firearms were seized and surrendered during the election period, from January 9 to June 8, 2022, in Cebu City.

This was confirmed by Police Major Jose Angelo Acupinpin, chief of operations of the Cebu City Police Office (CCPO). Acupinpin added that they have arrested 110 persons during the nationwide gun ban in the city.

For her part, Police Lieutenant Colonel Janette Rafter, deputy director for operations of CCPO, said that strict implementation of the gun ban in the city led to the confiscation of these firearms.

Rafter said that aside from putting up checkpoints, police have also visited gun owners whose permits have already expired through its “Oplan Katok”.

Further, the Cebu City police, in coordination with other concerned agencies, were able to conduct a total of 3,131 Commission on Elections (Comelec) checkpoints. Authorities issued a total of 6,554 citation tickets to erring individuals for various violations.

As the election period is over, Police Colonel Ernesto Salvador Tagle, CCPO chief, directed his personnel to now focus on their anti-criminality campaign, especially on illegal drugs.

From the said election period, police conducted 784 illegal drug operations. This resulted in the arrest of 333 high-value individuals and 547 street-level individuals. A total of 23 kilos of suspected shabu were confiscated from these operations with a market value of at least P160 million.

Earlier, Police Lieutenant Colonel Wilbert Parilla, the newly installed deputy director for administration of CCPO, said that they are now back in their original places of deployment against criminality following their duties in the recent elections.