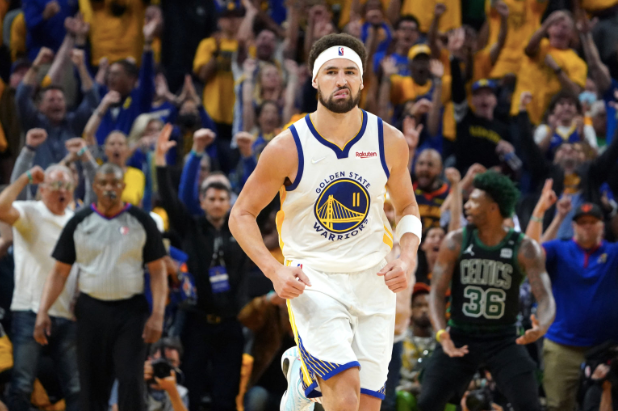 Golden State Warriors guard Klay Thompson (11) reacts after making a three-point basket during the second half in game five of the 2022 NBA Finals against the Boston Celtics at Chase Center. Mandatory Credit: Kyle Terada-USA TODAY Sports

Golden State Warriors guard Klay Thompson earned the nickname “Game Six Klay” due to his spectacular play in those critical contests but said he is not looking to force the issue in Game Six of the Finals on Thursday.

Thompson has been steadily warming up during the series and the game offers the Warriors a chance to beat the Celtics on the road and claim their fourth championship in eight years.

“It’s obviously a nickname I earned and I want to live up to it,” Thompson told reporters on Wednesday.

“At the same time, I don’t want to go in there and play hero ball. I’m just going to be in there and be myself, do what I’ve been doing the last few games. I know that will allow us to be successful.”

Thompson plans to tap into his killer instinct, which he said means playing with “incredible intensity, force and will.”

Thompson has averaged over 20 points and shot nearly 50% from three-point range in 12 career Game Six’s.

The most memorable came when he scored 41 points and made 11 three-pointers to lead the Warriors to a thrilling come-from-behind win over the Thunder in the Western Conference Finals in 2016.

YouTube has a highlight reel devoted to his Game Six heroics and Thompson has admitted to watching it when he finds himself in a shooting slump like the one he was in earlier in the series.

“Game Six Klay, I don’t know how he’s been able to do it,” his fellow sharpshooting guard Stephen Curry said.

“Just his personality, no moment is too big for him in terms of hooping, enjoying himself, embracing hostile crowds, or if we’re at home enjoying the home atmosphere,” he said.

“He has a knack for those type of big moments. Just so happened to be Game Six. And he has another opportunity to add to that tale tomorrow.”

NBA Finals: Klay Thompson plans to shoot his way out of slump

Read Next
Jodi Sta. Maria celebrates 40th birthday: ‘As I cross the mid-point of my life, it has grounded me in new ways’