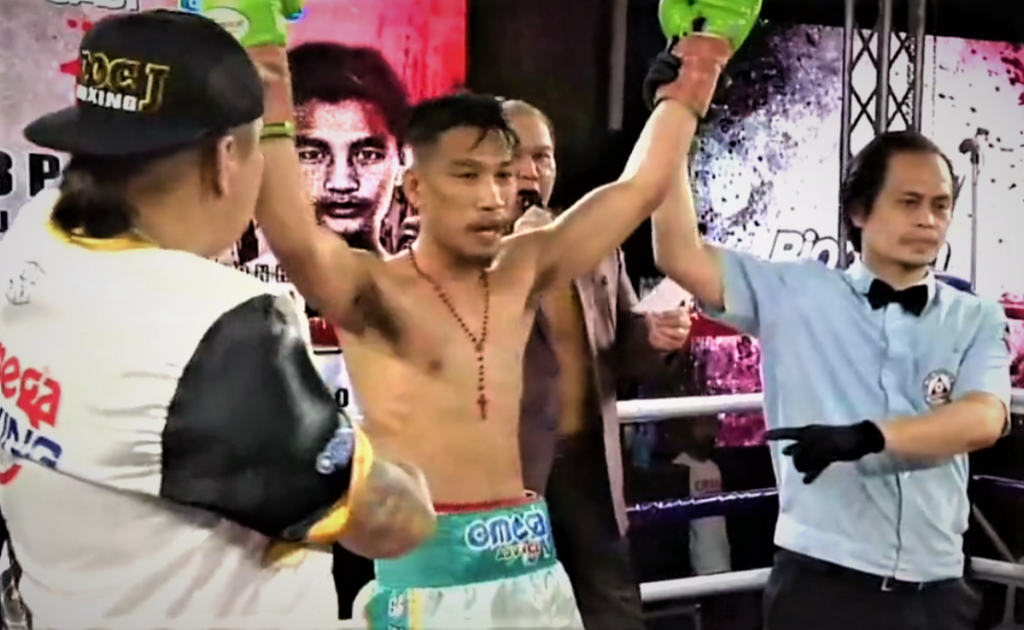 Mark Vicelles celebrates after defeating Jaysever Abcede in the main event of Kumbati 13 on Friday at the Parkmall in Mandaue City. | Screen grab from the livestream.

Leading the impressive outings was world-rated Mark “Rasta Mac” Vicelles who made easy work against Jaycever Abcede in the main event.

The 26-year-old Vicelles, rated No. 2 in the WBO’s light flyweight division scored a first round knockout.

Abcede got knocked down with a body shot. Oddly, Abcede didn’t stand right away from the knockdown, and appeared to wait a little too late while referee Nic Banal was calling off the mandatory 10-second knockdown rule.

The result, Banal stopped the bout after Abcede didn’t stand after calling off the seconds. To his dismay, Abcede and his corner left the ring immediately and didn’t wait for the official announcement.

With the victory, Vicelles remained unbeaten at 17 wins with 10 knockouts and 1 draw, while Abcede suffered his 11th defeat with 21 wins and 13 knockouts.

In the co-main event, Christian Araneta defeated Toto Landero via unanimous decision in their 10-rounder duel. All three judges favored Araneta with the scores of 98-92,98-92, and 99-91.

The Cebuano Araneta logged his 22nd victory with 17 knockouts and two defeats. Landero absorbed his eighth defeat with 11 wins and two draws.

In the undercard, Benny Canete made Mark Antaran quit on his stool before the third round started in their eight-rounder bout. Canete forced Antaran to quit after pummeling the latter with vicious punches to the head and body.

Canete’s win improved his unbeaten record to 6-0 (win-loss) with five knockouts, while Antaran dropped to a 4-5-3 (win-loss-draw) record with three knockouts.

Meanwhile, Carlo Bacaro walked away with a technical decision win against Jimmy Borbon in their six-rounder bout. Bacaro who was clearly dominating the bout suffered a deep cut on his left eyelid in the in the third round.

It forced the ring physician to stop the bout before the sixth round started after his cut was profusely bleeding. Thus, Bacaro who was leading the score cards with the scores of 50-44 from all three judges was declared the winner.

In the curtain opener, Ramil Roda defeated Norman Rusiana by unanimous decision. The judges’ scorecards were 40-36, 39-37, and 39-37, in favor of the Omega Boxing Gym pug.

Read Next
What it is like in the Arellano household