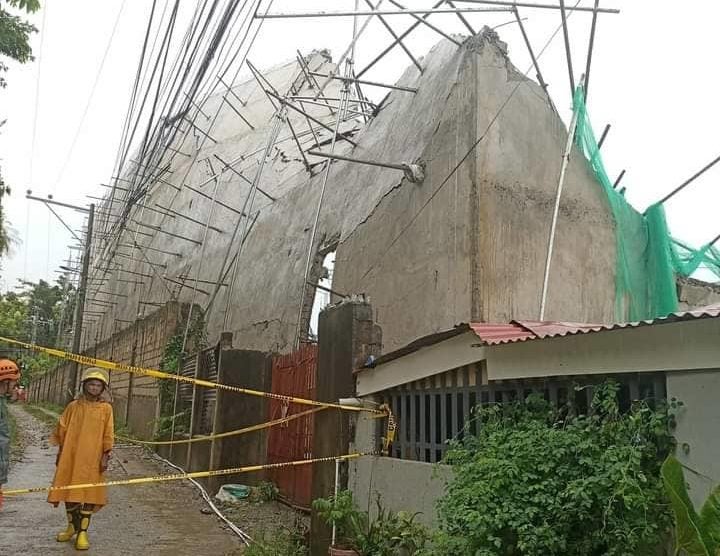 Some portions of a warehouse that is under construction along V. Albano St. in Barangay Maguikay, Mandaue City collapsed on Wednesday, June 22, 2022. | photo from Mandaue City Disaster Risk Reduction and Management Office

MANDAUE CITY, Philippines—Some portions of a warehouse that was under construction along V. Albano St. in Barangay Maguikay, Mandaue City  collapsed on Wednesday, June 22, 2022.

Engineer Robert Alforque, the structural engineer of the Office of the Building Official (OBO), said they are still investigating the possible cause of collapse of some portions of the warehouse.

Alforque said it may be because some of the materials used in its construction are substandard.

Alforque said the structure has a building permit but they will still need to ask the approved plan of the building.

Senior Fire Officer 1 Riel Denura of MCFO, meanwhile, said no one was injured in the incident.

Denura said currently, they are coordinating with the warehouse’s owner.

Currently, the outside portion of the warehouse has been cordoned for safety reasons.

Since there is no other access to some of the houses near the warehouse, Denura encouraged residents to always be mindful and be careful when passing through the affected area because the structure still poses danger. Denura added that vehicles are also discouraged to pass through the road beside the warehouse.

The CDRRMO, on the other hand, believes heavy downpour might have been the cause of the collapse of some concrete walls of the warehouse.

Heavy rain was experienced in some parts of Metro Cebu on Wednesday morning, including Mandaue.

Pagasa-Mactan in its advisory past 10 a.m. said that a low pressure area (LPA) and an Inter-tropical convergence zone (ITCZ) are the two prevailing weather systems in the Visayas and other parts of the country.

Due to the heavy rainfall, an area in Lopez Jaena Street in Barangay Tipolo experienced flooding.

Karl Cabahug, CDRRMO Research and Planning Division head, said that apart from Tipolo, no other area in the city experienced flooding.

Cabahug said that the massive clean-up drive conducted by the city and DPWH at the downstream of the Butuanon River at the boundary of barangay Paknaan and Umapad in Mandaue City was a big help in minimizing possible flooding in the city.

Cabahug added that the CDRRMO continues to prepare for possible heavy downpour this rainy season. They are also closely monitoring the weather at the command center and the city’s high risk areas.