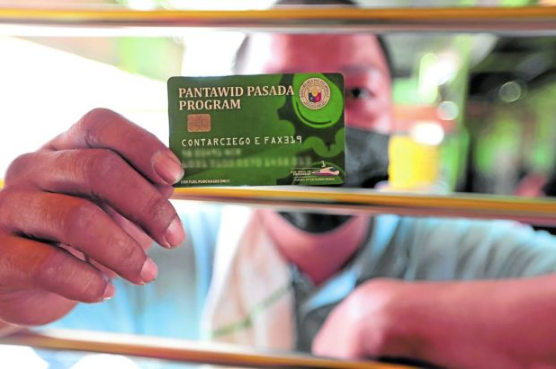 FILE PHOTO: A jeepney driver shows his “Pantawid Pasada Program” card while waiting for passengers at a transport terminal on Visayas Avenue in Quezon City. This photo was taken on March 16, 2022. —GRIG C. MONTEGRANDE

MANILA, Philippines — President Ferdinand Marcos Jr. said his administration is eyeing to expand the distribution of the fuel subsidy for the transport sector to include tricycle drivers.

The transport support was discussed during his first Cabinet meeting on Tuesday, according to him, adding that they have talked about the funding for the planned expanded program.

“We just discussed that we are going to try not only to continue the fuel subsidy for the transport sector but [also] to expand it to include the tricycles, which up to now have not been included,” he said in his first Palace briefing.

“We talked about in the Cabinet meeting the funding — where it can come from and how we are going to manage the funding for the additional fuel subsidy,” he added.

Marcos Jr. said that while the government has enough budget to last for the year “and a little bit beyond,” they still have to look where the money can come from should the program continue.

The fuel subsidy is meant to help public transport drivers and operators amid the skyrocketing prices of petroleum products.