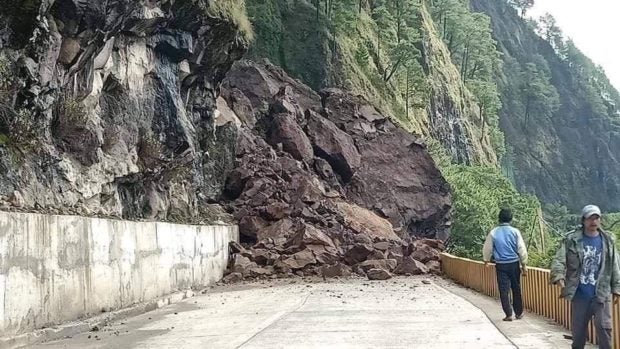 BAGUIO CITY—The Kennon Road in this city has been closed to traffic due to multiple slides after the magnitude 7 earthquake that shook Luzon Wednesday, July 27, morning, the Department of Public Works and Highways announced.

Despite an incident of erosion, one lane of the Marcos Highway, a major route up to the summer capital, is open to traffic, while the Bokod section of the Baguio-Nueva Vizcaya road and portions of Itogon town on the Baguio-Bua-Itogon road, both in Benguet province, have been closed.

A section of the Halsema Highway, the main vegetable road of the Cordillera, was also closed after a landslide in Bauko town in Mountain Province, said Cameron Odsey, Cordillera director of the Department of Agriculture.

A landslide also occurred on Asin Road in Barangay San Luis in this city. Erosion was reported in La Trinidad town, the capital of Benguet.

The provinces of Kalinga and Ifugao have also suspended work and school due to the powerful quake.