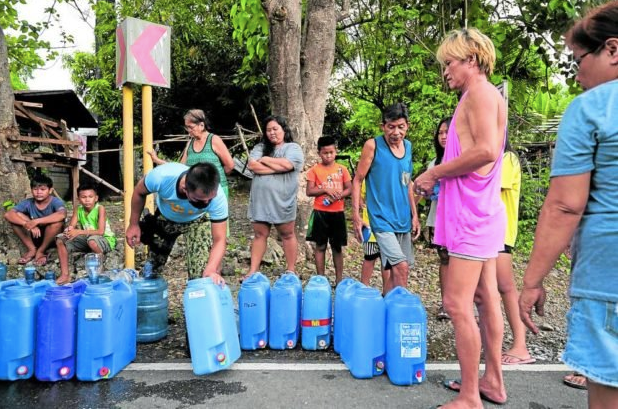 The Cebu City Disaster Risk Reduction and Management Council (CDRRMO) will request the city council to hold a special session for the P50 million proposed aid to earthquake-hit areas. In this July 27 photo are earthquake-affected residents of Bangued, Abra, who queue to get their supply of water. | REUTERS (file photo)

CEBU CITY, Philippines — The Cebu City Disaster Risk Reduction and Management Council (CCDRRMC) is set to request the City Council to conduct a special session for the approval of the proposed P50 million financial assistance for earthquake-hit areas in Abra.

This was after Cebu City Mayor Michael Rama, on Wednesday, August 3, 2022, tasked CDRRMC head of Cebu City, Lawyer Gerry Carillo, to study how the city will apportion the P50 million in financial assistance that the city pledged for earthquake-affected areas in Abra last July 27, 2022.

In a statement from the Cebu City Information Office, Rama said the priority recipient of the assistance should be areas, which experienced an intensity of 4 to 7 last July 27; this is to ensure that the most heavily affected areas would get the aid from the city.

After meeting the mayor virtually on Wednesday, Carillo, on the same day, met with the members of the CDRRMC to discuss the financial assistance that the city would extend to the most affected areas.

Carillo said the CDRRMC approved the P50-million allocation, but it would still require the approval of the City Council.

“The mayor wanted to extend this assistance to the affected areas the soonest possible time. Intensity 7 and 6 mao ni areas atong priority (these are our priority areas),” Carillo said in the same statement.

Moreover, Carillo said he planned to leave for Abra along with CCDRRM Office Head Raquel Arce and her deputy Harold Alcontin next week to comply with the mayor’s instruction to check the province.

Meanwhile, the mayor, who also serves as president of the League of Cities of the Philippines (LCP), also announced that he would travel to a couple of the earthquake-affected cities in the coming weeks.

The mayor is still currently in home isolation after he tested positive for COVID-19.

Dr. Mary Jean Loreche, city’s consultant on health, said that the mayor, however, was asymptomatic.

Rama also instructed the LCP secretariat to encourage the 146-member cities to aid members’ cities that were hit by the earthquake.

Earthquake preparedness saves lives: What to do