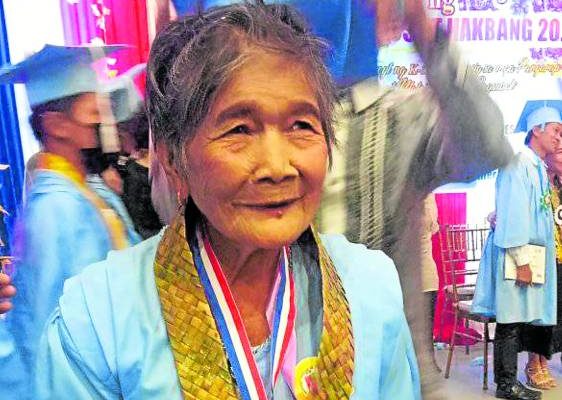 NEVER TOO OLD Corcondia Relleta, 83, is all smiles during her high school graduation at the Calbayog City Sports Center on Aug. 15. —PHOTO COURTESY OF GORGIE RELLETA

TACLOBAN CITY—She may be in her twilight years but 83-year-old Corcondia Relleta of Calbayog City in Samar province refused to remain idle.

Instead, she studied hard to complete basic education.

On Aug. 15, Relleta graduated from high school under the Alternative Learning System (ALS) of the Department of Education (DepEd).

According to her 21-year-old granddaughter Gorgie Relleta, her lola was all smiles during the graduation ceremony in her home city.

“She was so happy to finally wear a toga. She was beaming with pride,” she said.

Gorgie said her grandmother was not able to finish her studies due to poverty.

Concordia, however, now proved that age was never a hindrance in achieving a goal.

Gorgie said she cried when her grandmother was walking up the stage of the Calbayog City Sports Center to get her diploma, donning a toga.

“I was crying while watching her. I am proud that she was able to realize her long-life dream of wearing a toga,” she said.

Gorgie, a second-year student of Bachelor of Science in Community Development at the University of Eastern Philippines in Catarman, Northern Samar province, said she helped her grandmother with her assignments while studying via ALS, a distant learning program of the DepEd targeting out-of-school youths and adults who want to have basic education.

She said her grandmother worked as a barangay sweeper and earned at least P1,500 a month, which she used for her medical needs.

Gorgie said her grandmother would still want to pursue a college degree if given the chance.

“But for us, it’s already an achievement for her to finish ALS at the age of 83,” the granddaughter said.

At 60, lola looks forward to teaching in high school