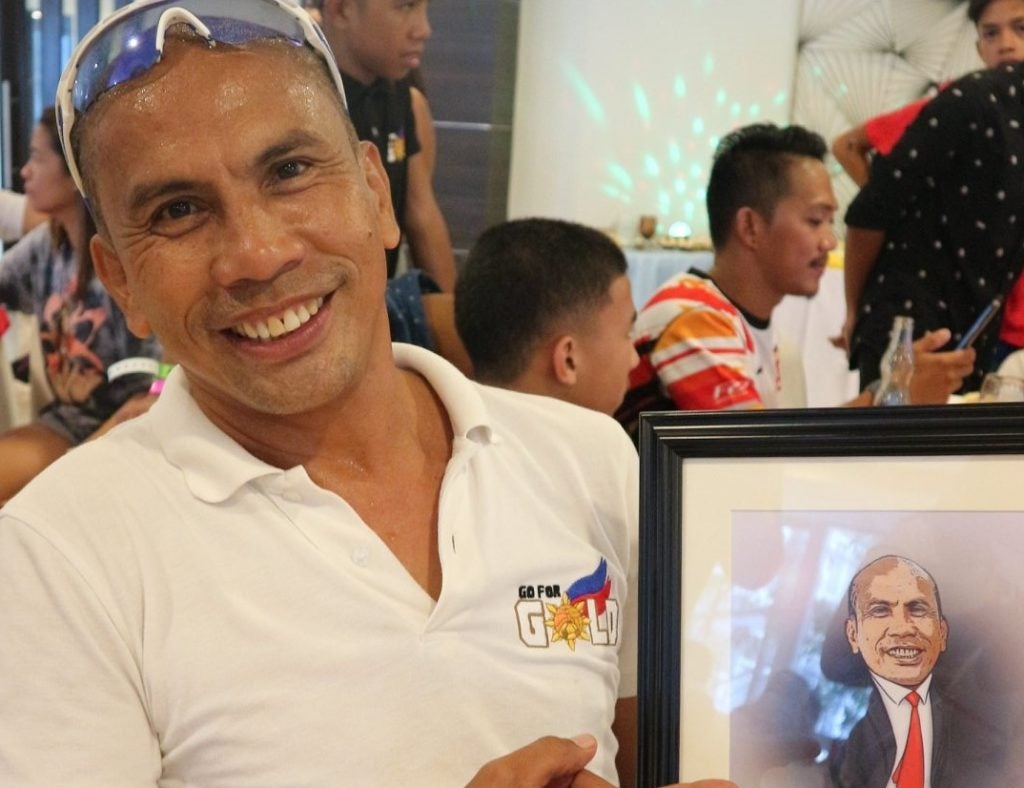 CEBU CITY, Philippines—Cebu has been known as triathlon’s “Crown of Jewel in Asia” for its annual hosting of the grand IronMan 70.3 race.

But it hasn’t produced world-class triathletes until a father from Talisay City took the risk of transitioning from a swimming coach to a triathlon coach.

Roland Remolino is already considered a household name in Cebu’s triathlon scene, mainly because of his massive contribution in the sport, particularly in producing two of the country’s promising triathletes in Andrew Kim Remolino, who is his son, and his former swimmer, Raven Faith Alcoseba.

Remolino’s Cinderella story from a nobody to becoming a national triathlon coach started in 2000.

According to the 57-yrear-old Remolino, this was the time he started training kids from public schools. He brought the kids to Talisay’s public beach instead of paying to use a swimming pool.

It was not until 2015 that Remolino got his much-needed breakthrough after joining an aquathlon event that pitted his son Andrew Kim against national triathlon team members.

“During 2015, the national triathlon team of coach Melvin Fausto raced here in Cebu; they called it Arellano Aquathon that then-Senator Pia Cayetano sponsored. We tried joining with Kim, and surprisingly we beat the national team. It was there they saw the potential of my athletes that even though they’re swimmers, they are also strong in other disciplines,” said Remolino

From then on, Remolino’s life was forever changed.

EYE OF THE NEEDLE

Remolino revealed that before his triathlon team became known in Cebu, they needed to endure hardships. As a swimming coach, he faced a blank wall when training kids in triathlon. He also lacked the necessary equipment to train kids.

“I didn’t expect everything of it would happen. All I wanted was for my athletes to earn a spot on the national team and all we did was do our best. I think God blessed me with success we’re enjoying, but it doesn’t mean it was easy. I needed to go through the eye of a needle to reach this far,” said Remolino when asked if he expected to end up as one of the national triathlon coaches.

However, he prevailed with the help of various private entities and help from the Talisay City LGU.

Remolino has been known for his one-of-a-kind training style, which he loves to call “Inato lang.”

It means that he doesn’t entirely follow conventional training. Instead, he applies his own methods and principles, which turned out to be effective.

Today, Remolino has other triathletes besides Kim and Raven Faith who have already shown huge potential in triathlon.

His strict military-style training in triathlon pushed many of his athletes beyond their limits, which helped them discover their potential in the sport.

“My inspiration is my son, John. When he was still alive, he used to help me train my athletes and helped his brother Kim prepare for races. I can now see John in one of my grandkids, John Luigi. His death became my motivation to strive further. I promised him before he was laid to rest that we would [succeed] in triathlon,” said Remolino.

When asked about his ultimate goal as a triathlon coach, Remolino said he wants his triathletes to win the Asian Games. For him, it’s a more realistic goal than gunning for the World Triathlon Series, which costs a lot of money even just by qualifying.

“It’s to dream the impossible dream. I know it’s very difficult, but my goal for my current triathletes is to win the Asian Games. If we chase the World Triathlon, it will cost us a lot of money just to earn points to qualify, which goes the same as the Olympics. That’s why we aim for the Asian Games, which also serves as a qualifier for the World Triathlon Series,” added Remolino.

He also revealed that part of his ultimate goal is to produce the best Filipino triathlete who can compete in both Southeast Asia and entire Asia.

However, the lack of funds hinders him from achieving that goal. Thus, he is asking the private sector to adopt a triathlete and help them reach their dream.

Currently, Remolino’s triathletes, who are also under the Talisay Luigi Triathlon Group, enjoy the full support of Go For Gold’s sports development program.

At the same time, Kim and Alcoseba are regularly called up by the national team to represent the country in various races abroad.

“I plan to produce the best Filipino triathlete. That’s why I’m knocking on the private sector’s doors to adopt or somehow support one of my triathletes and help them become the best,” Remolino Concluded.

Talisay to host aquathlon on Oct. 9

By: Yann Magcamit
Faces of Cebu

FACES OF CEBU: Rosenda Villarin, 52, proud farmer and a mother