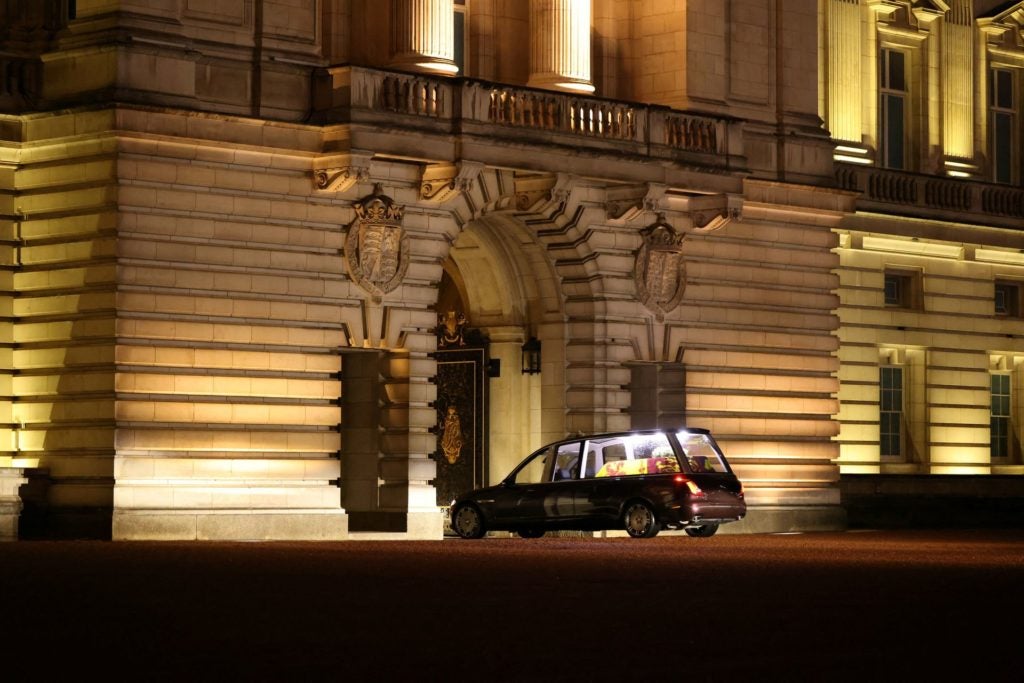 Image of Her Majesty Queen Elizabeth’s coffin, being returned to Buckingham Palace in London today (13/09/2022). CORPORAL REBECCA BROWN/Pool via REUTERS

LONDON/BELFAST, Sept 13 (Reuters) – King Charles and members of the royal family received the coffin of the late Queen Elizabeth at Buckingham Palace on Tuesday, after tens of thousands of people lined the streets in heavy rain to mark its arrival in the British capital.

On a dark night, the well-lit hearse travelled slowly from a nearby airport through London, with crowds stood all along the route, some in the road, others throwing flowers, and many ditching their cars or running from nearby streets to catch a glimpse of the cortege.

As it entered the grounds of the London palace, the police outriders who had led the way stopped to bow their heads.

Charles, who automatically became king on the death of his mother last week, had gathered to received the coffin along with his three siblings, two sons William and Harry, and other senior members of the royal family, a palace spokesperson said.

Elizabeth died peacefully on Thursday in her holiday home at Balmoral Castle, in the Scottish Highlands, at the age of 96, plunging the nation into 10 days of national mourning.

The death of Britain’s longest-reigning monarch has prompted hundreds of thousands of people to gather at royal palaces across the country to express their condolences.

Princess Anne, the queen’s only daughter, travelled with the coffin, first from the remote castle at Balmoral to Edinburgh, where it was greeted by tens of thousands of mourners, and then as it was brought to London.

“It has been an honour and a privilege to accompany her on her final journeys,” Anne said in a statement. “Witnessing the love and respect shown by so many on these journeys has been both humbling and uplifting.”

In Edinburgh, a party of bearers from the Royal Air Force carried the casket onto a transporter plane. A kilted honour guard from the Royal Regiment of Scotland stood with fixed bayonets as a regimental band played the national anthem as the plane began to taxi. With that, Scotland bade farewell to the queen.

On Wednesday, the coffin will be taken on a gun carriage as part of a grand military procession to Westminster Hall, where a period of lying in state will begin until the funeral on Monday.

Members of the public will be allowed to walk past the coffin for 24 hours a day until the morning of the funeral, which will be attended by dozens of world leaders including U.S. President Joe Biden.

As part of the highly choreographed days of mourning, King Charles is also travelling to the four parts of the United Kingdom.

Thousands of well-wishers greeted him in Northern Ireland on Tuesday, with handshakes, smiles and warm words as he walked along lines of people crowding the streets outside Hillsborough Castle, the monarch’s official residence in the province.

The visit was laden with political significance given Britain’s historical record in Ireland and the more recent years of violence in Northern Ireland known as the Troubles.

At a ceremony at Hillsborough Castle, the acting speaker of the Northern Ireland Assembly, Alex Maskey, paid fulsome tribute to the queen.

“Queen Elizabeth was not a distant observer in the transformation and progress of relationships in, and between, these islands,” said Maskey, a member of Sinn Fein, which seeks the reunification of Ireland.

“She personally demonstrated how individual acts of positive leadership can help break down barriers and encourage reconciliation,” he said.

Maskey, who was interned by the authorities as an Irish Republican Army suspect in the 1970s, said Charles had already shown he understood the importance of reconciliation and was committed to it.

In 2011, Elizabeth became the first British monarch to visit the Irish Republic since independence from London almost a century earlier.

Although a potent symbol of the union, she made powerful gestures of reconciliation for Britain’s bloody past in Ireland during the state visit, culminating in a speech in which she expressed regret for centuries of conflict.

A year after her visit to Ireland, the queen, whose cousin Lord Louis Mountbatten was killed by the IRA in 1979, shook the hand of former IRA commander and then Deputy First Minister of Northern Ireland Martin McGuinness in Belfast.

It was a milestone in a peace process that largely brought an end to three decades of violence between pro-British, largely Protestant, factions and nationalists, mostly Catholic, seeking to reunite Ireland and Northern Ireland.

Charles, addressing senior politicians at the castle, said he was committed to the welfare of all the people of Northern Ireland. He also paid tribute to Queen Elizabeth.

“My mother saw Northern Ireland pass through momentous and historic changes. Through all those years, she never ceased to pray for the best of times for this place and for its people, whose stories she knew, whose sorrows our family had felt, and for whom she had a great affection and regard,” he said.

SUPPORT FOR CHARLES UP

A new poll, meanwhile, showed Charles has enjoyed a surge in support since he became king.

Now 63% think he will be a good king, a rise of 24 percentage points since March, while 15% believe he will do a bad job, compared with 31% six months ago, the YouGov poll found. read more

Charles had carved out a role for himself speaking out on issues from climate change to architecture, an at times controversial contrast to his mother, who kept her personal opinions hidden throughout her reign. read more

Since becoming king, he has repeatedly said he would follow his mother’s example.

Tearful crowds sing ‘God Save the Queen’ at Buckingham Palace