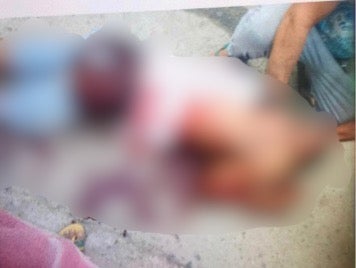 A man was stabbed to death by his neighbor in Barangay Busay, Cebu City on Monday morning, September 19, 2022. | Photo courtesy of Malubog Police Precinct

CEBU CITY, Philippines — The suspect in a stabbing incident that killed a man in Barangay Busay, Cebu City, will be subject to inquest proceeding on Tuesday, September 20, 2022.

The suspect, identified as Joeme Tan, was arrested for stabbing to death his neighbor, Willy Oquiano, on Monday dawn, September 19.

Police investigation showed that Tan stabbed his neighbor Quijano after the latter attacked him at his home.

The possible trigger of the victim’s attack, according to Police Major Caesar Acompañado, chief of Malubog Police Community Precinct, was jealousy as neighbors claimed that Oquiano’s wife had a relationship with Tan.

(On Sunday night, they already had a personal grudge. That night, the victim already challenged the suspect in his house since they lived beside each other. But the suspect didn’t come out.)

Acompañado said the victim provoked the suspect again on Monday dawn as Oquiano forced his way to the suspect’s house and allegedly struck and hurt Tan with a piece of wood.

As he wanted to defend himself from his attacking neighbor, Tan grabbed a knife and stabbed Oquiano multiple times.

As per their investigation,  Acompañado said that jealousy was allegedly the reason of the grudge between both. Based on the claims of neighbors, the victim’s wife allegedly had a relationship with Tan.

The victim got mad about this and forced his wife to admit the issue. The victim’s wife reportedly claimed that she was nearly raped by the suspect.

However, police could not tell when the alleged attempted rape happened nor verify if this was true.

Acompañado added that the suspect did not have any criminal record in their barangay.

Tan is currently detained at the police precinct as of this posting pending the filing of a Homicide case against him.

Woman gunned down in Busay