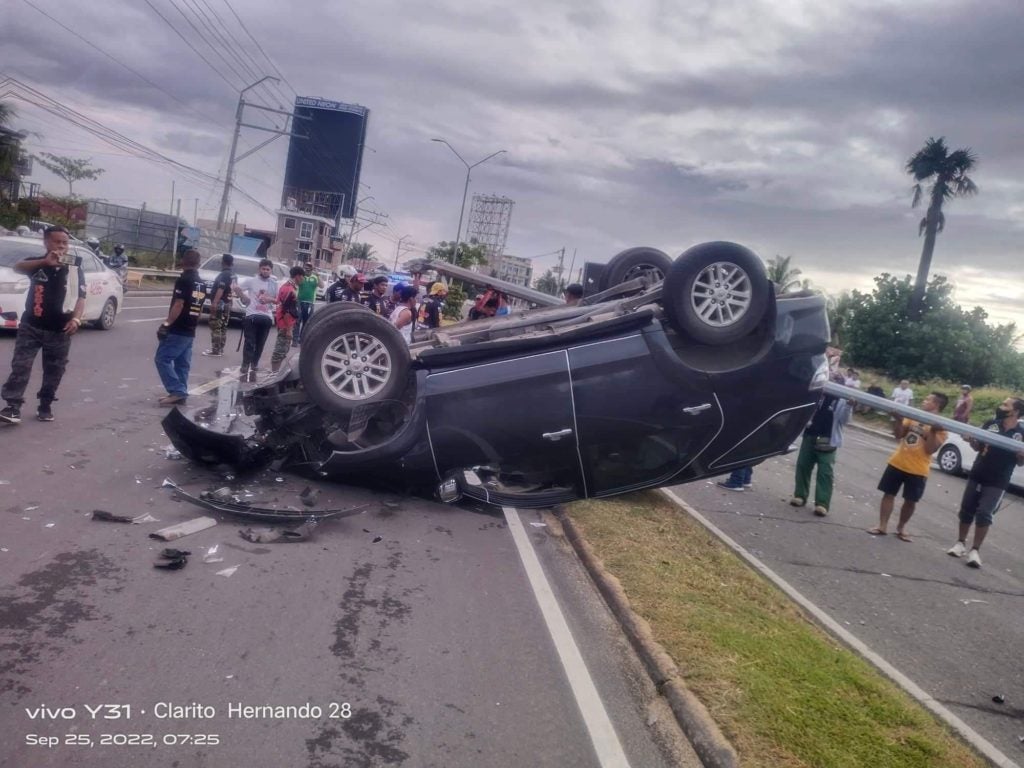 A Toyota Fortuner overturns after it hit a post and a pickup truck at the Cebu South Coastal Road in Talisay City at past 8 a.m. today, Sept. 25. | CT-TODA

CEBU CITY, Philippines — A tired and sleepy driver, who was heading home after joining a fun run, lost control of his Toyota Fortuner while he was cruising along the Cebu South Coastal Road in Talisay City at past 8 a.m. today, Sept. 25.

The SUV driver then crashed into a lamp post at the center island, hit a pick up truck, then the SUV rolled over and landed on its roof.

The crash also toppled the lamp post at the center island, which fell on a portion of the road, said Jonathan Tumulak, head of the City of Talisay Traffic Operations and Development Authority (CT-TODA), in a message to CDN Digital.

This also caused a motorcycle rider following the SUV to crash on the road after its wheel got snagged by the electric wire from the fallen post, said Tumulak.

He said that the SUV driver, Mathew Rivera; and the motorcycle rider, Humber Fanoga; were brought to the hospital for treatment of the cuts and bruises they suffered from the accident.

They were later released from the hospital.

With the accident, Tumulak reminded drivers to always practice defensive driving and to avoid driving when one was sleepy or tired.

Tumulak said this after Rivera, the driver of the SUV admitted that he was sleepy and tired after joining a fun run a few hours earlier.

(According to the driver, he was going home on his SUV and he was sleepy while driving because he joined a fun run earlier.)

Karen Davila calls for help for street sweeper hit, run over by SUV in Parañaque