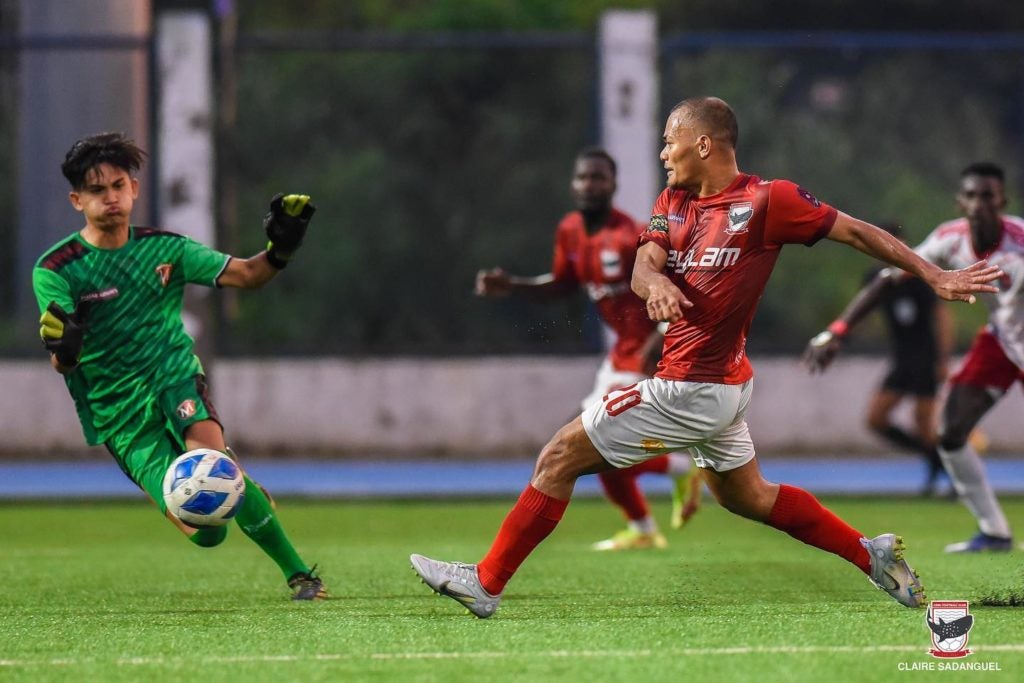 Roberto Corsame Jr. goes for a strike during their match against Mendiola FC 1991 in the PFL on Saturday, Sept. 24, 2022. | Photo from the Cebu Football Club Facebook page

CEBU CITY, Philippines— The Cebu Football Club (CFC) Gentle Giants wrapped up the first round of the Philippines Football League (PFL) on top of the standings with a lopsided win against the Mendiola FC 1991, 6-2, on Saturday, Sept. 24, 2022 at the Philippine Football Federation (PFF) National Training Center in Carmona, Cavite.

The Gentle Giants now has 17 points from five wins, two draws and one loss. They dislodged erstwhile league-leader, Kaya FC Iloilo, which is now trailing them at the No. 2 spot with 15 points, while United City FC is at third with 13 points.

Moreover, their victory on Saturday extended their winning streak to four.

It was a stellar night for the Gentle Giants after Chima Uzoka tied Arda Cinkir for the race of the Golden Boot award with seven goals apiece after the former scored a brace or two goals.

Uzoka tallied his goals at the 17th and 81st minutes. Veteran Roberto Corsame Jr. also had a brace by converting goals at the 87th and 90th minutes.

Jeremiah Borlongan and Daniel Gadia chipped in a goal each at the 37th and 51st minutes.

During the match, Uzoka initiated the scoring spree at the 17th minute by slipping off from Mendiola’s loose defense.

They made it, 2-0, from Borlongan’s 37th minute goal after receiving a long pass from the returning goalkeeper Ace Villanueva. Borlongan took advantage from a miscommunication between the back end and the goalkeeper of Mendiola to score the goal.

However, Mendiola FC retaliated with a 47th minute goal from their ace striker Junior Ngong Sam via a penalty kick to bring their team to a 1-2 deficit. Sam earned a penalty kick after being fouled by John Renz Saldivar.

The Gentle Giants returned in the second half with guns blazing after Daniel Gadia made it, 3-1, by easily flicking the ball inside the goal from Uzoka’s lob at the 51st minute.

Mendiola made last efforts after Jimson Crestal scored a spectacular long-distance strike to make it 2-3.

However, Uzoka and Corsame Jr. sealed their victory. Uzoka scored one more goal at the 81st minute, while Corsame scored his brace at the 87th and 90th minutes.

CFC will have their first ever home game on Oct. 9, 2022 against Kaya FC Iloilo at the Dynamic Herb-Borromeo Sports Complex.