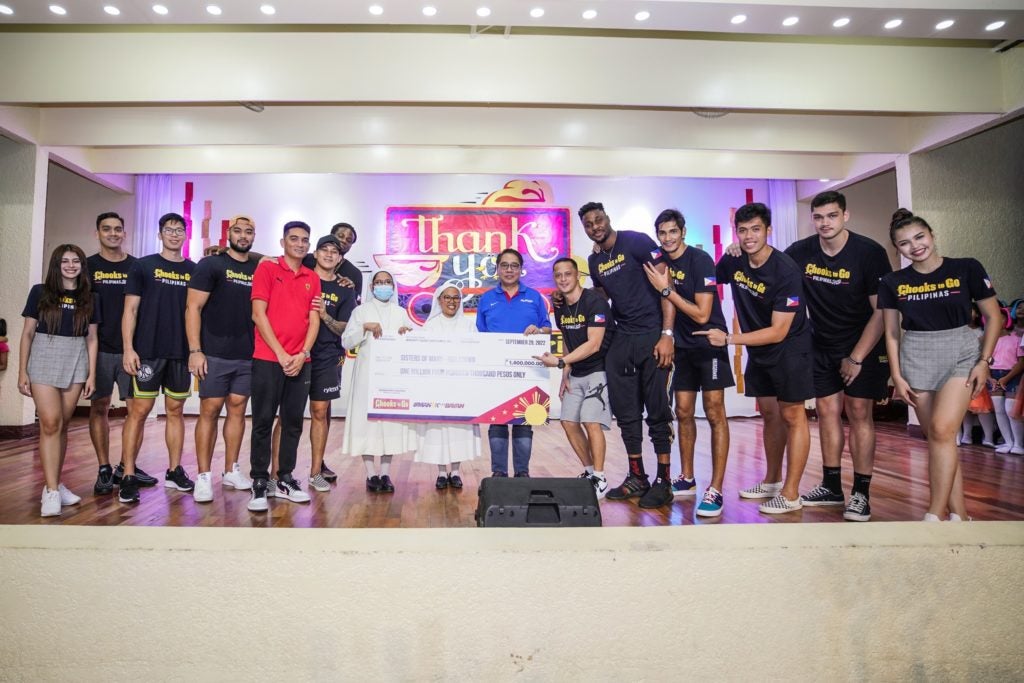 Ronald Mascariñas (in blue shirt) holds the mock check with the Sisters of Mary School (SMS) Girlstown representatives during a charitable event on Friday, Sept. 30, 2022. | Photo from Chooks-to-Go Pilipinas.

CEBU CITY, Philippines — The country’s “Godfather of 3×3 basketball” Ronald Mascariñas has extended his generosity to the Sisters of Mary School Girlstown by donating a whopping P1.4-million and other pledges on Friday, September 30, 2022.

Mascariñas is in Cebu for the biggest 3×3 basketball tournament in the Queen City of the South’s history, the Chooks-to-Go Pilipinas FIBA 3×3 World Tour Cebu Masters which unfolds tomorrow, Oct. 1, 2022, at the SM Seaside City Cebu.

The event will run the entire weekend.

His visit to the Catholic educational and vocational institution which houses thousands of impoverished youths retraced the first step of establishing his 3×3 basketball sports program in the Philippines.

In 2019, Mascariñas initiated his 3×3 basketball sports program in Cebu to develop the sport in the Philippines.

In his return, Mascariñas was welcomed warmly by the students of the Sisters of Mary School Girlstown, the same place where Chooks-to-Go organized an age group 3×3 basketball tournament in 2019. That event broke the world record for the most number of players with 3,043 participants.

Mascariñas surprised the Sisters and students of the school with a donation of P1,400,000.

On top of that, Mascariñas also promised to provide sports equipment to the school and one Chooks-to-Go meal every month for all the 2,220 students of the institution.

As a show of gratitude to Mascariñas and Chooks-to-Go, the students of the school prepared a program where they displayed their various talents to entertain their benefactor and guests.

Accompanying Mascariñas in visiting the school were Cebu Chooks and Manila Chooks.

“I have never experienced anything like this back in Canada,” said the Philippines No. 3 3×3 player Brandon Ramirez of Cebu Chooks.

“It’s definitely life-changing. Both Cebu and Manila Chooks will be fighting for everyone here when we compete not just in the Cebu Masters but in all our tournaments.”

Read Next
Toni Gonzaga ‘unbothered’ kahit inaayawan ng netizens: They are the reasons why we are here today