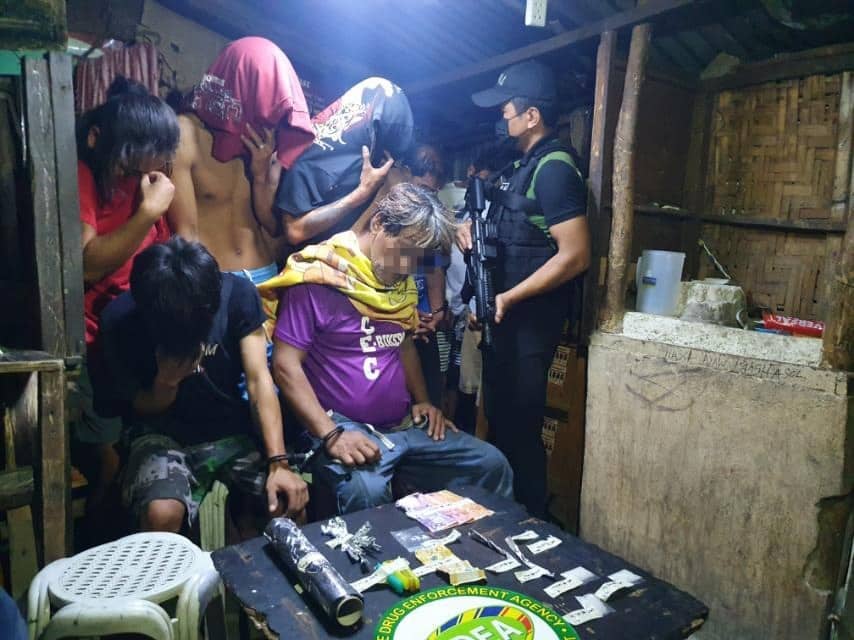 A father, his son, and seven others were arrested while in a drug den in Barangay Tisa, Cebu City, Saturday night, October 2, 2022. | Photo courtesy of PDEA-7

CEBU CITY, Philippines — Benedicto Arias, 59, and his son Christian, 20, are believed to be operating a suspected drug den in Barangay Tisa in Cebu City.

The two were arrested by agents of the Philippine Drug Enforcement Agency in Central Visayas (PDEA-7) during a buy-bust operation at about 7 p.m. on Saturday, October 1, together with seven others who are said to be visitors of their drug den.

PDEA-7 agents also confiscated 16 grams of suspected shabu worth P108, 800 from the drug den and P260 cash believed to be proceeds from shabu sales, according to Leia Alcantara, the PDEA-7 spokesperson.

Alcantara said they placed the Arias under monitoring for at least three days before they planned the buy-bust operation on Saturday.

During their monitoring, they learned that the suspect is able to dispose at least 30 grams of shabu per week, Alcantara added.

Alcantara said complaints for the violation of the Dangerous Drugs Act of 2002 are now being prepared against the nine arrested individuals who are all detained at the PDEA-7 detention facility.

The seven others who were arrested with Arias and his son were identified as Lawrence Parba, 19; Bart Villona, 54; Roy Gadiano, 22; Ace Parba, 25; Richard Abucay, 35; James Daclan, 28, and Jeffrey Cabalquinto, 32.

Read Next
ROTC revival in college pushed instead