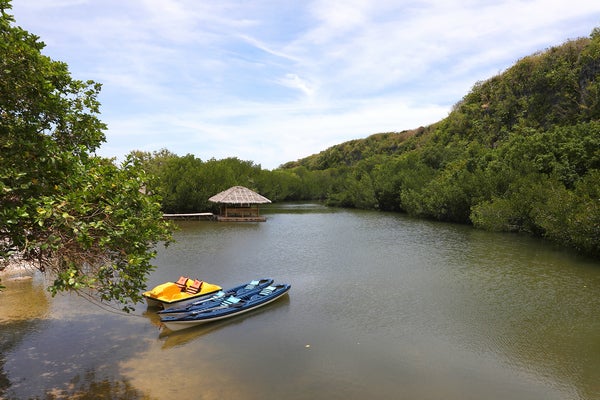 PREPARING FOR MORE TOURISTS. Tourism stakeholders like people in this resort on Sumilon Island in southern Cebu gear up for an expected increase in tourist arrivals especially with the start today (April 26) of the six-month closure of Boracay Island from tourists.
CDN PHOTO/TONEE DESPOJO

CEBU CITY, Philippines — The island province of Cebu landed on an international travel magazines once again.

Cebu was nominated as the Most Desirable Region in the world for the 21st annual Wanderlust Reader Travel Awards, the Department of Tourism (DOT) announced.

It will be vying for the title together with other famous destinations such as Abu Dhabi, California, Chiang Mai Province in Thailand, Dubai, Quebec, Florida, Arizona, Hokkaido in Japan, Gangwon in South Korea, and the Nile Valley in Egypt, to name a few.

The Wanderlust Reader Travel Awards is an annual event recognizing the ‘best in the travel and tourism industry around the world. It is organized by Wanderlust Travel Magazine.

Wanderlust Travel Magazine is a UK-based, independent travel and leisure magazine whose publication began in 1993.

Aside from Cebu, other Philippine destinations were also nominated for the upcoming 21st Wanderlust Reader Travel Awards.

DOT, for their part, urged constituents to vote for the country.

“Show your support for the flag and cast your votes for the country,” they said in a post on Facebook.

Voting for the 21st Wanderlust Reader Travel Awards will end this October 25. Winners will be unveiled during a ceremony at the Tower of London this November 2022.

Cebu named among best islands in the world for 2022