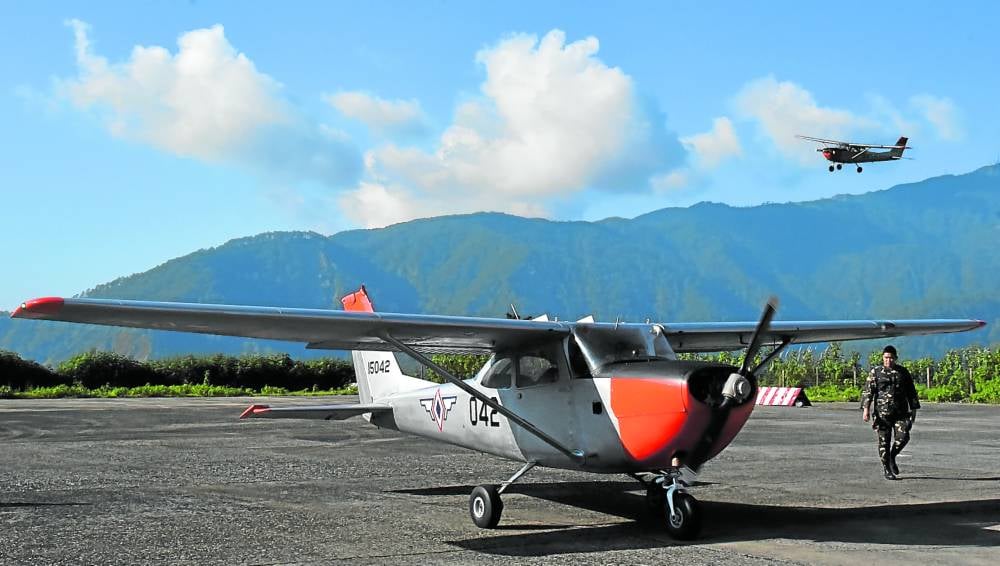 TRAINING FLIGHT Baguio City’s Loakan Airport has been idle for years but Philippine Air Force planes have been using this asset. In this 2019 photo, taken before the COVID-19 pandemic broke out, the mountain airport served as a training ground for military pilots. —EV ESPIRITU / INQUIRER FILE PHOTO

BAGUIO CITY (October 14, 2022) — Provinces in the Cordillera region will open their tourism destinations and sell their goods to the largely untapped market in the Visayas once Baguio City reopens Loakan Airport to domestic flights by the end of the year, an official of the Department of Tourism (DOT) said on Wednesday.

A plan for direct flights from Cebu City should bring travelers to the summer capital using Dash 8-Q400 Bombardier aircraft that would be operated by the country’s flagship carrier, Philippine Airlines, said Jovita Ganongan, DOT director in the Cordillera.

This type of aircraft is suited for the 1,802-meter Loakan runway.

Only Philippine Air Force planes have been using the Cordillera’s only airport for the past two decades.

The American colonial government built the mountain airport in 1934 before World War II broke out.

But Loakan Airport, at an elevation of 1,296 m above sea level, was dropped from the flight routes of many commercial airlines largely because of its heavy afternoon fog and frequent downpour that made navigation dangerous.

On Monday, Baguio Mayor Benjamin Magalong said the Department of Transportation had accelerated the time frame for Loakan Airport’s reopening.

If not on the original November deadline, the reopening would take place by mid-December in time for the Christmas holidays, which is Baguio’s peak tourist season, Magalong told reporters here.

In August, Magalong said the airport was getting a P68-million terminal upgrade so it could serve Christmas visitors, following a meeting with Transportation Secretary Jaime Bautista and Manuel Antonio Tamayo, acting director general of the Civil Aviation Authority of the Philippines (CAAP).

The runway’s storm drains are being upgraded to prevent a repeat of the 2018 floods triggered by a typhoon that inundated over 40 houses on either side of the airport.

Magalong said opening a gateway to Cebu should widen the types of guests who would visit the city.

To date, majority of Baguio’s visitors live in the Ilocos and Central Luzon regions and Metro Manila, he said.

Ganongan said tourists from the Visayas would help speed up economic recovery in the Cordillera, which suffered a negative 10.2 percent growth, or a contraction of the Cordillera’s gross regional domestic product, in 2020 when lockdowns began.

Its economy soared to 7.5 percent in 2021 when restrictions on movement and business operations were relaxed. This year, the government also eased rules that mandate the use of face masks in public spaces.

But it was too early to estimate how many Cebu tourists could be enticed to visit Baguio and other adventure destinations in Ifugao, Mountain Province, Apayao, Benguet, Abra and Kalinga, Ganongan said.

DOT intends to bring tourism operators and businessmen in the Visayas to the Cordillera in November to drum up interest in the region’s potential as a tourist and business destination, she said.

Neither the city tourism office nor local travel agencies have records indicating when commercial flights stopped in Baguio.

But airlines cut their Baguio routes after the 1990 Luzon earthquake devastated the summer capital. Proposals to establish island-to-island air tours at Loakan Airport were later drawn up but were not pursued. Low-cost airline Asian Spirit maintained Baguio flights until 2008. The last recorded commercial airline to land at Loakan was SkyPasada, a Pangasinan-based operation owned by the WCC Aeronautical and Technical College.

National officials almost gave up on the Baguio airport. former President Gloria Macapagal-Arroyo had contemplated turning the airport into an extension of the Baguio City Economic Zone, but was discouraged by local officials and businessmen in 2008.

The development of the Tarlac-Pangasinan-La Union Expressway, which reduced the seven-hour travel time from Manila to Baguio to four hours also made the airport irrelevant to some sectors.

In February 2019, then Socioeconomic Planning Secretary Ernesto Pernia endorsed a P500-million modernization plan for the Baguio airport, citing its economic impact on the Cordillera.

That project, however, was scuttled by the coronavirus pandemic in 2020 and had prevented Ramon Ang, chair of San Miguel Corp., from visiting Loakan for a possible investment plan, Magalong said.

CAAP still needs to modernize the terminal’s navigation instruments and other equipment, as well as address the fate of hundreds of families that have settled near the runway, the mayor said.

According to a 2021 inventory, about 300 houses and buildings lie within the 150-m buffer zone that is required by all aviation facilities.

Many of the airport settlers are descendants of Ibaloys who lived in Loakan before Baguio was designed and built in the early 1900s. Another section of the buffer zone has become a government resettlement community.