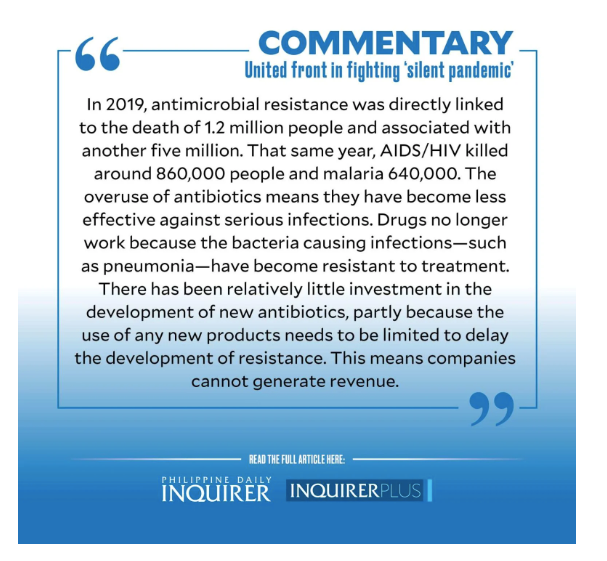 It’s called the “silent pandemic” and kills more than AIDS and malaria combined. Antimicrobial resistance is a serious threat to human health. Already, it has had a hand in the deaths of millions, and the numbers could get worse. How countries take on this threat has repercussions for the health of millions. It will require a new kind of health diplomacy in which nations negotiate rules for cooperation and agree on their responsibilities and entitlements.

In 2019, antimicrobial resistance was directly linked to the death of 1.2 million people and associated with another five million. That same year, AIDS/HIV killed around 860,000 people and malaria 640,000. The overuse of antibiotics means they have become less effective against serious infections. Drugs no longer work because the bacteria causing infections—such as pneumonia—have become resistant to treatment. There has been relatively little investment in the development of new antibiotics, partly because the use of any new products needs to be limited to delay the development of resistance. This means companies cannot generate revenue.

Many people in low- and middle-income countries still do not have access to antibiotic treatment for common infections. They often rely on local drug sellers who may supply substandard products. The same countries face an increasing problem with resistant organisms. According to a study published in the Lancet, antimicrobial resistance affects the poorest the hardest.

Sub-Saharan African nations have the highest fatality rate, at 27.3 deaths per 100,000 people. Infections of the respiratory tract, bloodstream, and stomach that were once treatable are now killing hundreds of thousands.

The World Health Organization has identified some strategies to address the problem. It calls for measures to reduce the burden of infections through good hygiene, especially in health facilities, and by vaccinating people against some common infections. It also calls on governments to support research and development of new antibiotics. But successful implementation needs sufficient funds and participation by all governments.

For example, the Global Antimicrobial Resistance and Use Surveillance System collates data on resistant bacteria around the world. Low- and middle-income countries should contribute to the system since they are important sources of new resistant organisms. In exchange, they need to receive support in reducing avoidable deaths from common infections by strengthening preventive measures and ensuring everyone has access to treatment, including antibiotics. The effectiveness of the response to COVID-19 highlighted a new approach to mobilizing science and technology to address urgent health problems. It involved early warning of the emergence of a new organism, rapid development of vaccines, and the production and distribution of medicines.

The rapid response was possible because of previous investments in cutting-edge research and collaborations between university scientists and private companies. This meant that rapid progress could be made when additional funds were provided during the crisis. There is a need for similar investments in understanding bacterial infections.

Some progress is being made. The United Kingdom is piloting a new approach to encourage the development of new antibiotics by making a fixed annual payment to companies that bring new products to the market. The United States is considering passing the Pasteur Act, which would take a similar approach. But we are yet to see other countries following suit. There are also no agreed rules for the use of new antibiotics and ways to preserve their efficacy. Incentives to increase the demand need to be complemented by measures that will encourage research.

Biotechnology can be a strategic sector for governments. Building the capacity to rapidly develop and produce drug treatments and vaccines at scale can strengthen national security and contribute to economic development. There are signs that some governments are funding new kinds of partnerships between academic laboratories and private companies to build expertise in biotechnology. For example, the US and China are committing substantial amounts of money to pursue leadership in this area. The UK has also identified this sector as strategically important. But there are dangers—competition between countries may also impede cooperation. And any failure to cooperate could lead to duplication of efforts and hamper scientific progress. Worse, it could lead to rival nations withholding important information about resistant bacteria or novel treatments to gain a commercial or geopolitical advantage.

To avoid this potentially dangerous outcome, it will be important to agree on basic rules about sharing information and enabling international cooperation between scientists. Low- and-middle-income countries also need to have access to new antibiotics.

One innovative approach to this challenge is an agreement between a Japanese pharmaceutical company, Shionogi, the Global Antibiotic Research and Development Partnership, and the Clinton Health Access Initiative. The agreement will allow local production and distribution of cefiderocol—used for treatment-resistant serious bacterial infections—in 135 low- and middle-income countries. This is a small step toward a more global approach to the development, production, and use of new antibiotics. We are now approaching a crossroads on how to meet the challenges of future pandemics. Forthcoming meetings of the G7 and G20 will provide a test of whether countries can agree on how to enact real change and back this up with commitments of sufficient funds. There is hope for global cooperation. But a lack of trust and cooperation could substantially impair the ability to address these public health challenges. The Jakarta Post/Asia News Network

Gerald Bloom is a research fellow at the Institute of Development Studies, at the University of Sussex, UK. His recent work includes studies of strategies for reducing overuse of antibiotics in rural India and for strengthening antibiotic discovery in the UK and China. The research was undertaken with financial assistance from the Medical Research Council of the United Kingdom. Originally published under Creative Commons by 360info.

The Philippine Daily Inquirer is a member of the Asia News Network, an alliance of 22 media titles in the region.