Sitio Mahusay under state of calamity 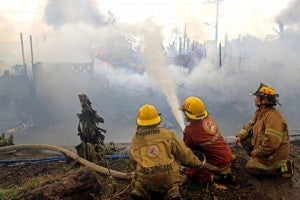 House owners are expected to receive P10,000 cash assistance while renters and sharers will get P5,000.

THE Mandaue City Council declared sitio Mahusay in barangay Subangdaku under a state of calamity after the fire that gutted 30 houses Thursday afternoon.

The declaration was made during a special session Thursday night after Mayor Jonas Cortes convened members of the City Disaster Risk Reduction and Management Council (DRRMC) and passed of a resolution recommending to the council to declare the area under a state of calamity.

House owners are expected to receive P10,000 cash assistance while renters and sharers will get P5,000.

But they will have to undergo an evaluation with the City Social Welfare and Development (CSWS) to determine if they are qualified to receive the cash assistance.

The victims were not allowed to rebuild their houses as some of them are beneficiaries of the socialized housing project in barangay Paknaan and their houses were supposed to be demolished early next year.

Other victims are occupying a private lot owned by Gaisano Corporation.

On the other hand, SFO1 Cipriano Codilla of the Mandaue City Fire Department, said they cannot confirm yet speculations of the residents that the fire was intentional.

“We cannot tell as of this time as our investigation is still ongoing. Speculations like this should be investigated,” he told CDN.