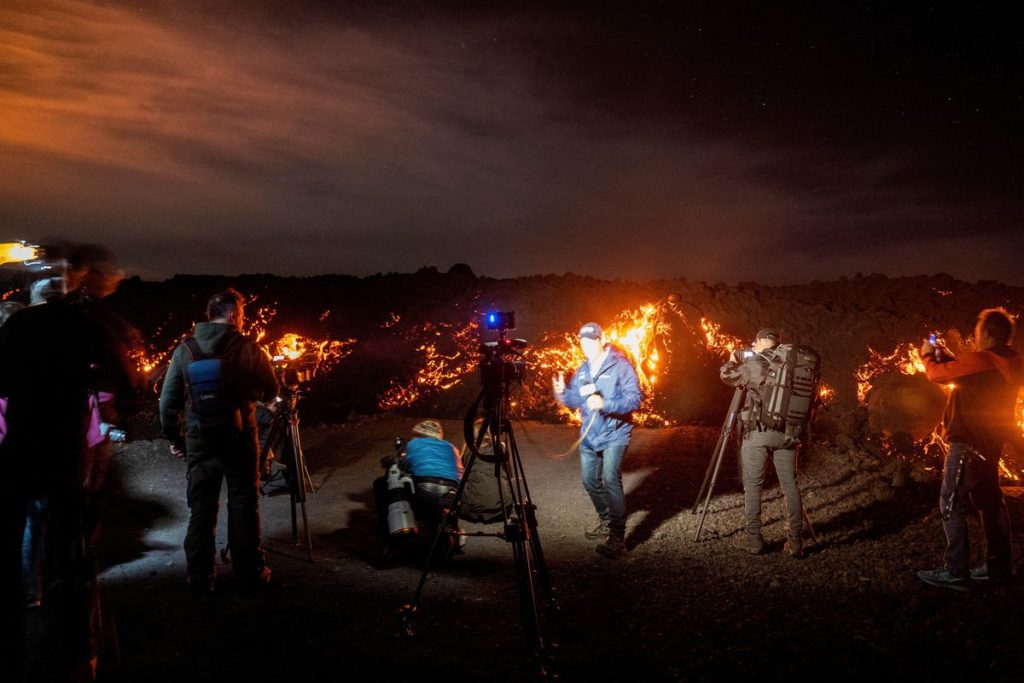 Members of the media report in front of a lava flow during the Mauna Loa volcano eruption in Hawaii, U.S. November 30, 2022. REUTERS/Go Nakamura

Dec 1 (Reuters) – Onlookers are flocking to glimpse the lava flowing from Hawaii’s Mauna Loa, the world’s largest active volcano that this week began erupting for the first time since 1984.

As Hawaii’s Emergency Management Agency said there are no signs that lava will threaten populated areas, dozens of people, including families with children in their pajamas, are arriving near the summit. They pull camping chairs and sacks from their vehicles and settle in and watch the natural wonder for a few hours. Local artists are even showing up to paint renditions of the eruption.

Lava flows from Mauna Loa are beginning to slow and spread out, authorities said, and they remain over three miles (5 km) away from a nearby highway.

The U.S. Geological Survey’s Hawaiian Volcano Observatory said in its latest Mauna Loa bulletin that the main lava flow is moving at .025 miles per hour (40 meters per hour). The service said that it is still detecting seismic tremors in the area, meaning that magma is still being supplied to the fissures and “activity is likely to continue as long as we see this signal.”

Mauna Loa rises 13,679 feet (4,169 meters) above the Pacific Ocean, part of a chain of volcanoes that formed the islands of Hawaii. It last erupted in March and April of 1984, sending a flow of lava within 5 miles (8 km) of Hilo, the island’s largest city.

Hawaii’s Emergency Management Agency said it had opened two shelters on the island as a precaution but had not issued any evacuation orders.

About half of all recorded eruptions of Mauna Loa have been confined to the summit, the agency said.