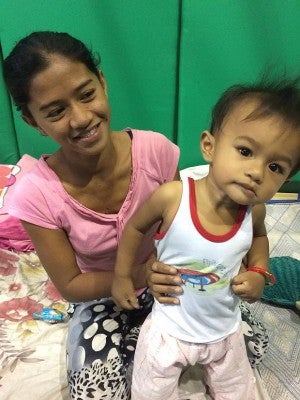 He and his 26-year-old mother Jobelle Ignacio, both residents of a coastal area in barangay Sawang Calero, were among the 7,096 families or 35,854 persons who stayed in 137 designated evacuation centers all over Cebu City.

Cebu City Mayor Michael Rama ordered the evacuation of families in high risk areas like those in coastal barangays, near rivers and in landslide-prone sites at 4 p.m. last Saturday.

At around the same time yesterday, Rama told the evacuees to go back to their homes.

Apollo and his parents,  grandparents and aunt shared a meal yesterday.

As she carried her son in her arms, Jobelle whispered into his ear “mopalit tag cake ug balloons, baby (we’ll buy cake and balloons, baby)” and Apollo giggled.