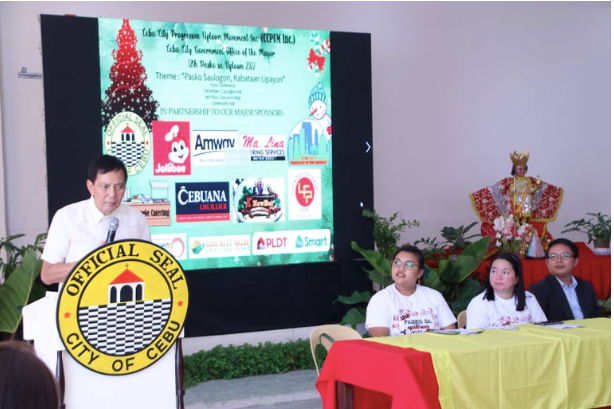 Mayor Mike Rama shows support for the organizers of the Pasko sa Uptown by showing up at the press conference. (PIO/Ruel Rosello)

CEBU CITY, Philippines — About 4,000 underprivileged children from Cebu City’s 80 barangays are set to enjoy and benefit from the city government’s “Pasko sa Uptown” this Saturday, Dec. 10, 2022, at the Cebu City Sports Complex (CCSC).

Now on its 12th year, the annual Pasko sa Uptown, with the theme “Pasko Saulogon, Kabataan Lipayon,” promises to be a “huge gift-giving” activity for its children beneficiaries, the Cebu City Public Information Office (PIO) said in a report.

The Pasko sa Uptown is the flagship project of the Cebu City Progressive Uptown Movement (CCPUM), the city government, and the private sector.

The whole-day program will include games and gift-giving to children, as each of them will receive bundles of joy containing rice, canned goods, and toys, among others.

CCPUM president Creslito Nieves said they had also scheduled visits to a few mountain barangays in the city whose beneficiaries cannot attend the event at CCSC this Saturday.

They are set to hold smaller gatherings in the gyms of these barangays this coming Dec. 16, 17, and 18.

Nieves said the children beneficiaries were identified by the barangay gender and development (GAD) focal persons.

More than 200 businesses, groups, and individuals from the private sector sponsored this year’s Pasko sa Uptown.