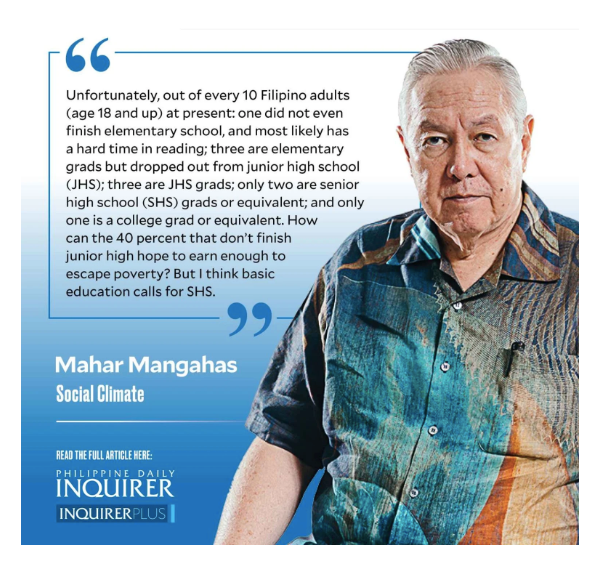 This year marks 40 years since the pioneer national survey of Self-Rated Poverty (SRP) in the Philippines, done in April 1983, which discovered that 55 percent of household heads interviewed rated their families as Mahirap, rather than Hindi Mahirap, or on an (unlabeled) line between the two terms.

The SRP question was re-surveyed nationwide in exactly the same way in July 1985, then twice a year in 1986-91 (except that only one round was done in 1988), and then at least quarterly ever since 1992 (except in 2020 when the pandemic prevented face-to-face interviewing until November).

As of the end of 2022, four decades later, fully HALF of all Filipino families are Poor, and only ONE-FIFTH are Not Poor, despite a doubling in income per person in real terms, i.e. corrected for inflation. So much economic growth, but so little of it shared.

The frequent and rapid monitoring of SRP, via bottom-up measurement, has revealed the intense volatility of poverty. There have been many changes in SRP, both upwards and downwards, of size larger than the sampling error margin, even over as short a period as one quarter. Of course, even a change of only 1 point per quarter becomes significant when accumulated over multiple quarters.

In contrast, official poverty, based on a top-down poverty line, began to be measured only from reference year 1985, and was done only once every three years, thus producing only 12 observations of poverty over the 36-year period, 1985-2021. The announced new two-year frequency of official measurement means that the next reference years will be 2023 and 2025, with findings for release a year later. (I think the government could afford to do it annually, at the same budget, by not insisting on provincial details.)

The most important correlate of SRP is the rate of inflation. An easy money policy will quickly hurt the poor.

Growth in real per capita income, on the other hand, has a very weak relation to poverty reduction. Unfortunately, the quarterly Labor Force Surveys are not reporting data on real wages of rank-and-file employees; I think raising the real wage should be targeted in the development plan.

Rural poverty is always higher than urban poverty. Rural areas deserve fair access to amenities such as clean water, sanitation, electricity, and modern transportation and communication.A means-targeted program like the conditional cash transfer (Pantawid Pamilyang Pilipino Program or 4Ps) works, if uninterrupted. The SWS surveys also check into assistance from both government and private sources. A schooling-enhancement program, such as providing vouchers usable to pay the fees of either public or private schools, will also work. The aim should be to provide universal basic education.

Unfortunately, out of every 10 Filipino adults (age 18 and up) at present: one did not even finish elementary school, and most likely has a hard time in reading; three are elementary grads but dropped out from junior high school (JHS); three are JHS grads; only two are senior high school (SHS) grads or equivalent; and only one is a college grad or equivalent. How can the 40 percent that don’t finish junior high hope to earn enough to escape poverty? But I think basic education calls for SHS.

Access to overseas work opportunities lessens poverty. The SRP surveys include the connections of families to relatives overseas, who send remittances.Victimization by natural disasters increases poverty. The SWS surveys showed that Supertyphoon “Yolanda,” by itself, resulted in a three-point rise in SRP.Victimization by violent conflict increases poverty. Justice and good governance will lessen the tendency to violence.

I never dreamed, 40 years ago, that generating plentiful data on poverty was possible. But thankfully it happened, and hopefully, it continues.