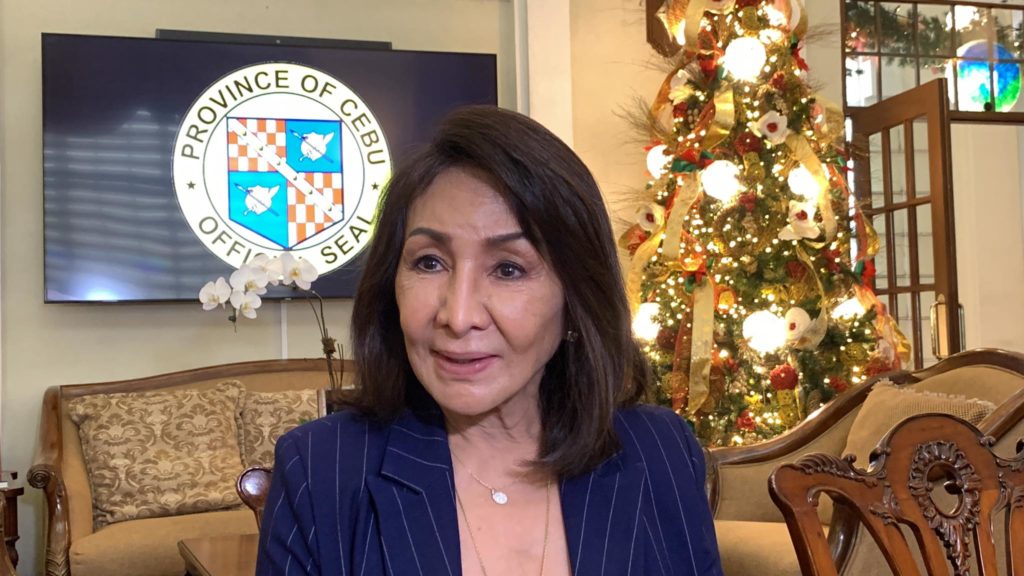 Cebu Governor Gwendolyn Garcia has raised her concerns about the South Road Properties as the venue for the upcoming Sinulog Grand Festival. | Morexette Marie Erram

Garcia on Monday, Jan. 9, expressed concerns on the current state of the festival which would be held at the SRP.

During Monday’s press interview, the governor suggested reconsidering holding the much-awaited event at the SRP, and instead, place it back to its usual venue, the Cebu City Sports Center (CCSC).

“Maybe, today is not the right time to change the venue,” Garcia told reporters.

“Mas maayo siguro nga magtraditional lang sa ta. Kay, after all, Sinulog is part of our tradition, and tried and tested na ang atong mga pamaagi through all of these years,” she added.

(It would be better that we will go traditional for now. Because, after all, Sinulog is part of our tradition, and our way has been tried and tested through all of these years.)

The governor also shared her observations on the progress made for the venue of the Grand Parade and Ritual Showdown, saying that organizers might also need more time to put everything in place and ensure the festival’s success.

(You know, there are still other Sinulog. It can still be that we plan this well first. We finish the infrastructure first, our traffic management plan.)

While not junking SRP’s potential for holding Sinulog Festivals in the future, she added that should organizers push through on holding the festivities this Sunday, January 15 might lead to disastrous results.

“If we do this now, and we are not able to fully address the consequences, (then) holding it at this point in time, the Sinulog might not come to expectations. Worse, daghan unya…ta mga problema (Worse, we might have … problems later),” the governor pointed out.

Executives from the Sinulog Foundation Inc. (SFI) earlier announced that the Grand Parade and Ritual Showdown for the Sinulog Festival this Sunday would still be held at the SRP, despite criticisms and backlash from the public.

Aside from Garcia, other personalities, including former SFI chairperson Ricky Ballesteros, expressed their concerns on the state of Sinulog-related preparations at the SRP.

When reporters visited the site where the Ritual Showdown will take place on Monday morning, or six days before the festival will culminate, only the stage has been completed.

The pathways leading to the concrete stage remain muddy, and construction works have been slow due to prevailing bad weather.

Garcia, on Monday, raised several, particular concerns on holding the Sinulog festivities at the SRP. These are traffic, security, and the health of the performers.

She said closing off the entire SRP would be disadvantageous to motorists, commuters and residents from central and southern Cebu.

“SRP is the main artery for the south. When you close the SRP, I don’t think Natalio Bacalso (Avenue) can hold the volume of vehicles that regularly must travel to the south or come from the south,” said Garcia.

In terms of security, the governor also pointed out that the venue might not be viable due to its openness.

She also expressed concerns on the SRP’s location, which was right by the sea, (and) might adversely impact (on the) performers’ health.

Meanwhile, Garcia begged off to comment on unofficial reports circulating that she reportedly threatened to withdraw the Capitol’s donation of P12 million to the SFI should the latter push through with its plans to hold the Sinulog at SRP.

She will be continuing her tradition of offering a dance to the Holy Child this Sunday. However, when asked if she would do so in the SRP, she requested not to provide further comments.

“Let’s not push it to that point. As I’ve said, reason will prevail. I trust that Mayor Mike Rama is a very reasonable man. And above all, let us put our faith in the Santo Niño that the best solution will come out,” she added.

At least two million individuals are expected to attend and witness the comeback of the Sinulog Festival, one of the country’s grandest and largest festivals here.

Guardo: Asphalting works at SRP grandstand suspended on Sunday due to bad weather