Christmas reunion for mom in jail 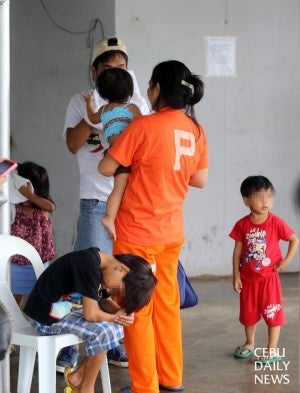 A few months ago he stepped out of prison, cleared of drug charges.

On Christmas eve,  36-year-old Niño  was back again in the Cebu provincial jail, this time as a visitor.

He brought his four young children for a reunion with their mother, his partner Lou.

Niño said he loathed the idea of spending Christmas eve at the  Cebu Provincial Rehabilitation and Detention Center (CPDRC), after having spent a year behind bars till his case of illegal drug possession was dismissed.

Then last November, the mother of his children was arrested for the same drug-related charge in their home in Poro town, Camotes Island.

(After that, I really hoped that we could all be together for Christmas. The kids miss their mother so much.)

The family visit last Dec. 24 was the first time since Lou’s  arrest.

The mother was one of the provincial jail’s 2,216 inmates who were allowed  to spend time with relatives inside CPDRC for Christmas.
By 7 a.m., a throng of eager visitors lined up outside the gate of the CDPRC  which was open from Dec. 24 to the 25th, Christmas day.

Some brought gift-wrapped presents, others carried in food.

Visitors like  Niño  had nothing to offer but Christmas greetings and an embrace for their loved ones inside the jail.

Getting there wasn’t easy.

The former farm worker said he had no money for boat and bus fare to Cebu City or anyone to help accompany his children, aged 7, 5, 3 and 1.

Determined to see his common law wife,  Niño said he borrowed money from his parents. A close friend gave him free passes for the two-hour boat ride from Camotes island to Danao City, where they would catch a bus to Cebu City.

Before his detention, Niño worked in a small coconut farm in Camotes. His girlfriend was also jobless.

“I didn’t expect anyone to help us get here but people helped, maybe because it’s Christmas,” he told Cebu Daily News in Cebuano.
Upon seeing their mother dressed in the prison’s bright orange uniform, the children rushed into her  arms.

According to Niño, the children were terrified when police barged into  their house last November, looking for their mother.

After his own jail stint, he said, the family was not ready for another arrest.

“Human nako. Akoa na pud asawa. Ang mga bata nahadlok, nanghilak pagdakop (After my ordeal, it was my wife’s turn. The children cried when she was arrested)” he told CDN.

Last Wednesday’s reunion, however, was joyful. The children were all smiles. The family was complete, at least for a day.

His Christmas wish?  Only one, said Niño,  that the case against his wife be dismissed, so they can be together as a family again.

Read Next
Hope remains amid calamities