Are remaining trees along S. Osmeña Road left for dead? 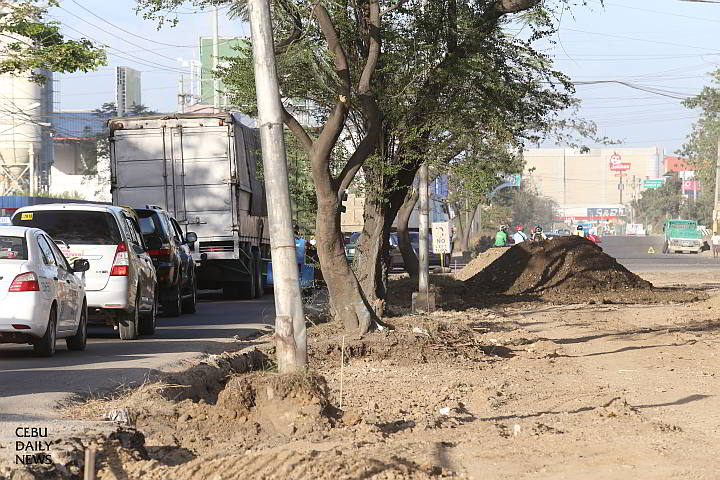 Standing Still. Roadwork is ongoing beside the center island of this portion of the S. Osmeña Road in front of the Cebu Daily News. (CDN Photo/ Junjie Mendoza)

It has been almost a year since 79 trees along the S. Osmeña Road have perished and it looks like those that are still standing will soon follow, if nothing is done.

With roadworks going on for almost a year, the landscape of S. Osmeña Road has changed.

What used to be a long stretch of blacktop with a line of fire trees at the center which afforded motorists some relief from the sun’s fiery glare, is now a grey concrete road while  much wider is obviously hotter.

A few trees which look like they sprouted out from the concrete, dot the traffic islands of the completed portions of the road. With hardly enough space around its base and with the hot summer months looming, the remaining trees might die.

Removing the trees and earth-balling them to a different area could save them.

Prior to the incident in March last year, the DPWH-7 was granted with an earth-balling permit by the DENR-7 for the trees to be affected by its P289.5-million road concreting project.

But after the trees’ disappearance, which was believed to have happened in late March last year, the DENR-7 issued a Cease and Desist Order (CDO) on the DPWH’s earth-balling activities.

Since then the DPWH-7, through the private contractor WT Construction Inc. (WTCI) has been working around and tweaking the road layout so that the remaining trees are untouched.

No cutting
“We have not lifted the CDO because DPWH-7 failed to comply with the three conditions in the CDO,” said DENR-7 spokesman Eddie Llamedo.

A case was already filed by the DENR’s Community Environment and Natural Resources Office (CENRO)-Cebu City against officials of WTCI.

Overshadowed
The issue was overshadowed by yet another tree-cutting issue between the DPWH and the DENR last year – the century-old trees in the City of Naga, San Fernando and Carcar City.

In that incident, both agencies agreed that the trees should go. The DENR-7 identified some century-old trees along the national road as safety hazards to people and vehicles passing through. They needed the DPWH and their equipment to do the job of felling the huge trees.

But public uproar was sparked.

Eventually, DPWH Secretary Rogelio Singson ordered Canlas not to push through with cutting down the century-old trees.

DENR Secretary Ramon Paje then followed suit. A memorandum in August last year froze all applications for tree-cutting permits in the country.

DPWH’s Canlas was dismayed at the order saying it can cause delay of projects.

“We have applied before (for a permit) but the new policy on this makes it highly improbable to secure such. If you will note the new policy, then practically no permit will be issued. Very stringent, costly and it will take too much time, so much so that it may eat up the contract period of the project,” Canlas said.

Canlas said they are currently fast-tracking the completion of the S. Osmeña Rd. project, as well as other road projects in Cebu because of upcoming meetings related to the country’s hosting of the Asia Pacific Economic Cooperation (Apec).

A seemingly resigned Canlas said they can’t do anything with the trees anymore.

But is not touching the trees really helping?

Right now, it’s not clear  who is responsible for the care and preservation of the trees – the DPWH and its contractor? Or the DENR?

There have been no recent discussions between the two regional agencies on what should be done with the remaining trees.

If the DPWH has decided not to remove the trees  – either cut them or transfer them – while waiting for a resolution to the case and the DENR is also just waiting for the DPWH to comply with their requirements so the CDO can be lifted and they can earth-ball the trees, what’s going to happen?

If they can’t agree on what should be done, one thing is for sure, the remaining trees’ chances of survival is steadily becoming dim.