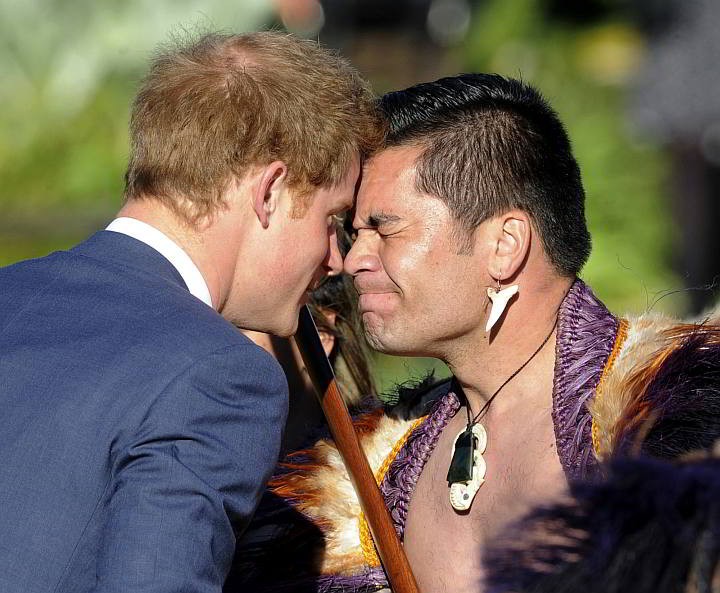 WELLINGTON, New Zealand — Britain’s Prince Harry arrived in New Zealand yesterday for a weeklong visit and was soon talking about the country’s prowess in rugby, pressing noses with indigenous Maori leaders, and laughing off marriage proposals.

Harry was greeted by Prime Minister John Key and other dignitaries when his plane landed in Wellington on a sunny and calm fall day. Wearing a blue suit, Harry stopped often to say hello to cheering fans as he began his first tour of the South Pacific commonwealth nation of 4.5 million.

From the airport, he traveled to Government House for an official welcome. He pressed noses with Maori leaders in a traditional greeting called a “hongi” and met with military representatives. He also talked with schoolchildren, feigning surprise when some told him they didn’t play rugby.

“I thought you would be forced to play rugby,” he said. “That’s why you have such a good rugby team isn’t it?”

Harry was scheduled to watch a rugby game Saturday night between Wellington’s Hurricanes and South Africa’s Durban-based Sharks. The prince also talked about soccer, telling the children that most royal family members were Arsenal fans.

One young girl gave Harry a card for his niece, Princess Charlotte, which the prince popped in his suit pocket and promised to pass along. Charlotte was born last week, bumping Harry down a notch to fifth in line to the throne.

The prince then traveled to the National War Memorial where he laid a wreath at the foot of a statue and placed a native fern on the Tomb of the Unknown Warrior, to honor those killed in war.

The 30-year-old prince was greeted along the way by exuberant fans, some offering to marry him and one woman holding a sign with lipstick kisses that read “Don’t worry, I won’t KISS YOU!” — a reference to a woman who managed to land a kiss on the prince’s cheek in Sydney earlier this week.

Harry seemed to take the attention in good spirits.

Read Next
A mother’s love