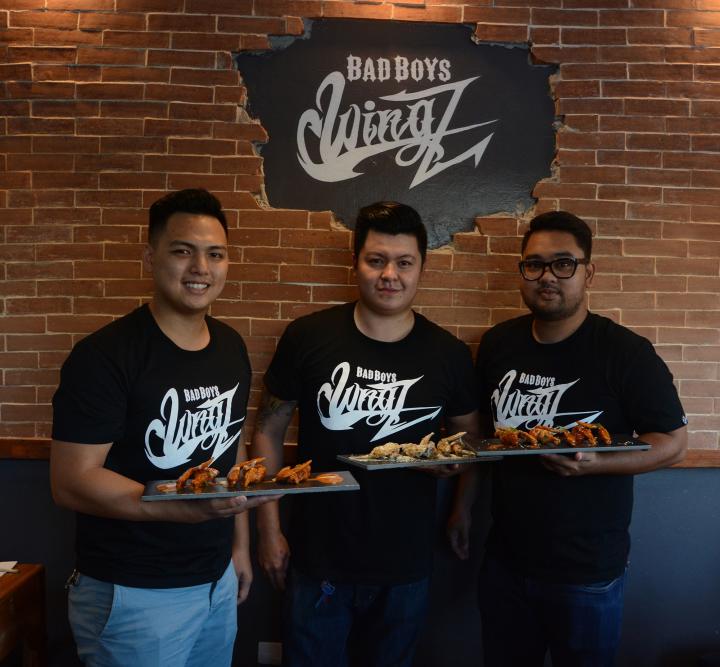 Now, they have a store and plan to open another next year.

Bad Boys Wingz opened on March 16 across Bright Academy in Banilad. Its 30-square-meter space can seat up to 20 customers at one time.

Ortiz, who trained at the International Culinary Arts Academy Cebu (ICAAC) and had a management experience managing Sunburst SM and Mango branches, supervises kitchen operations and comes up with different food offerings.

He said they decided to specialize on chicken wings because this is a popular favorite.

They invested a total of P300,000 in their first store, which they earned during weekend bazaars. They used to earn an average of P10,000 every weekend at the Banilad Town Center.

“We’ve joined bazaars at Escario Centrale, Oakridge and at Parkmall. For every bazaar we could earn from P24,000 to P28,000,” said Aseniero.

Since they opened the store, sales has been very good.

“Since we opened in March, our gross income is about P100,000. We have been getting positive feedback from customers,” Ortiz said.

The location of the store proved to be strategic as it is near the University of Visayas, University of San Carlos and Bright Academy.

“We have students coming here as well as those living in dormitories and boarding houses nearby. We also make sure that our prices are affordable for them,” said Santos.

They have also started offering other dishes like boneless chicken; the rib; fish and chips; side dishes like the spuds, spam fries and sweet potato fries; and spicy chocolate mouse and oreoccino for dessert.

Ortiz said they have stopped selling at BTC and stopped joining bazaars for now to focus on the store.

“We want to grow this first before we go out and explore other opportunities,” he said.

Read Next
Brigada Eskwela kicks off with caravan today