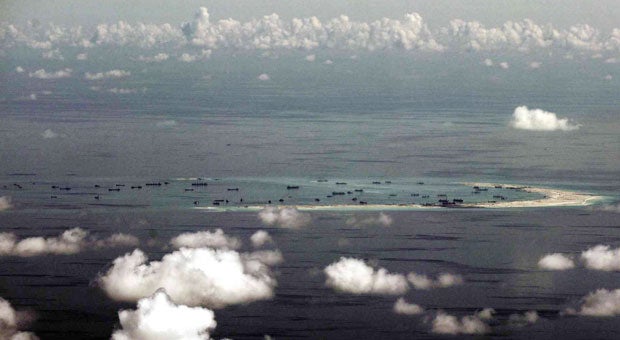 This photo taken from a military plane shows the ongoing reclamation on Mischief Reef, one of the reefs being claimed by China and the Philippines, in the Spratly Islands, in the South China Sea. (AP FILE PHOTO)

PUERTO PRINCESA, Palawan—China is pressing ahead with the construction of artificial islands on at least two reefs that are also claimed by the Philippines in the increasingly tensed territorial dispute, Filipino officials said on Friday, despite Beijing’s pronouncement that some work would end soon.

Mayor Eugenio Bito-onon Jr. of Kalayaan Island, which is under Philippine control in the Spratly archipelago, where attention has recently focused on China’s massive land reclamation work, said he flew last week near the Chinese-controlled Zamora Reef (Subi Reef) and saw construction was in full swing with many dredgers and a huge crane visible on the emerging man-made island.

“It’s a full-blast construction. It’s massive and incredible,” Bito-onon told The Associated Press, adding that it was evident it would take months before the Chinese complete the work.
Click Here

In the midportion of the emerging island, a 3-kilometer-long landfill is taking the shape of a runway, Bito-onon said.

His comments followed similar findings by the US military and independent defense analysts.

Building on other PH reefs

Two senior Philippine military officials, speaking on condition of anonymity because they weren’t authorized to talk to the media, said that aside from Zamora Reef, China’s island-building has also continued on Panganiban Reef (Mischief Reef), also in the Spratlys, based on recent military surveillance.

According to author Victor Robert Lee, China has reclaimed land at Panganiban Reef larger than its reclamation at Zamora Reef.

Victor Robert Lee is a pseudonym the author uses in his South China Sea and East China Sea reporting as well as in his spy novel “Performance Anomalies.”

Lee wrote in an article in The Diplomat that Panganiban Reef, based on a June 9 National Aeronautics and Space Administration image, “is now more than half filled in” and that China has done it in just three months.

“I don’t have the latest measurement, but it is safe to say that the landfill at [Panganiban Reef] is larger than at [Zamora Reef]—3.87 square kilometers,” Lee told the Inquirer on Wednesday.

Chinese Embassy officials in Manila did not comment immediately.

Infra building to go on

The Chinese foreign ministry said on June 16 that the land reclamation projects on some islands and reefs “will be completed in upcoming days.”

But, in a sign that the developments were far from over, the ministry also said on its website that China would follow up by building infrastructure for operations ranging from maritime search and rescue to environmental conservation and scientific research.

The United States and the Philippines, its defense treaty ally, have expressed concern that China’s island-building on at least half a dozen features in the South China Sea could be used for positioning military planes and Navy ships to intimidate other claimants, reinforce China’s claim over virtually the entire sea and threaten freedom of navigation in one of the world’s busiest shipping lanes.

Lee wrote that a straight segment of landfill on Zamora Reef is long enough to accommodate an airstrip and that the terrain grading patterns there resemble China’s preparations for the airstrip on Kagitingan Reef, making it likely that the construction on Zamora is also for an airstrip.

China’s foreign ministry spokesperson Lu Kang said in the statement that the projects “do not affect the freedom of navigation and overflight enjoyed by all countries in accordance with international law in the South China Sea.”

A US Navy plane flying near one of the artificial islands last month was told to leave the area by the Chinese military.

In a separate incident, a Philippine Air Force plane was similarly ordered by the Chinese Navy several weeks ago to leave the area.

The incidents raised fears that China was preparing to enforce an air defense identification zone over the South China Sea, similar to one it declared over disputed Japanese-held islands in the East China Sea in 2013.

The United States argues that China can’t use artificially constructed islands to expand its sovereignty.

US officials have said they were considering stepping up patrols to ensure free navigation in the contested region.

Without military muscle to defend its territory in the South China Sea, the Philippines has asked a UN arbitral court to nullify China’s claim to nearly all of the waterway where $5 trillion in global trade passes every year.

China has refused to take part in the proceedings, insisting it has “undisputed sovereignty” over the South China Sea.

Recto Bank is well within Philippine territory, but China insists it owns the reef.

The Philippines also held separate naval drills with the United States in the same area, drawing criticism from China.

Valte said the Philippine government, as a matter of policy, did not exaggerate facts.

“It is not in our nation’s interest to do so,” she said.

Japan, which is strengthening security ties with the Philippines, also responded on Friday, saying it was considering patrols in the South China Sea. /AP with Nikko Dizon.

Read Next
Teachers, parents work together for early childhood education