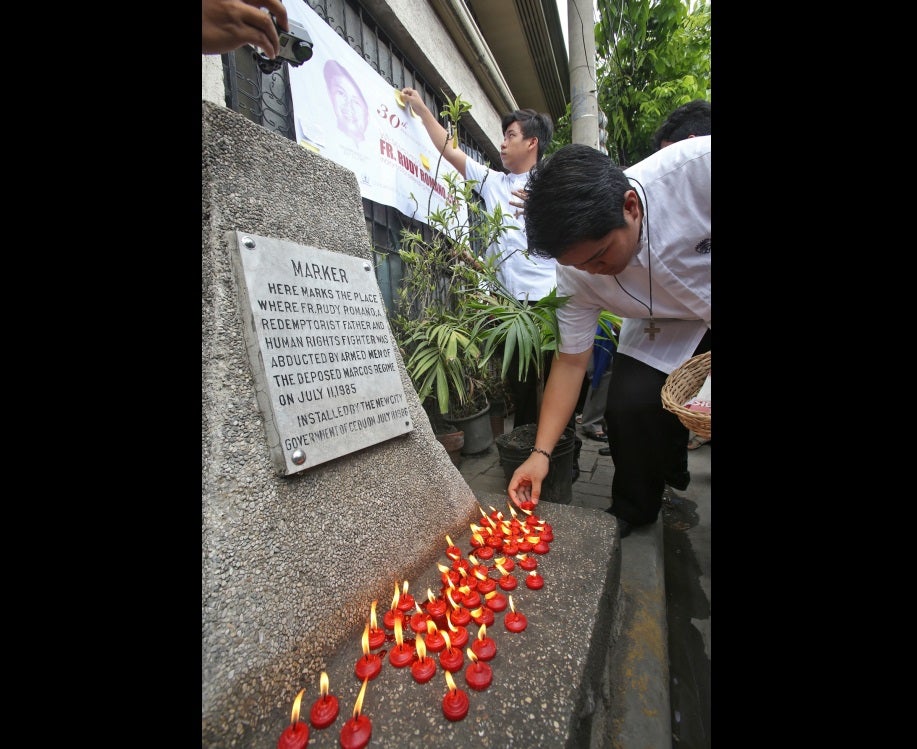 A seminarian of St. Alphonsus Seminary joins other supporters in lighting candles at the marker of Fr. Rudy Romano in Tisa, Cebu City, where he was abducted 30 years ago during the Marcos administration. (CDN PHOTO/JUNJIE MENDOZA)

The 1985 disappearance of the militant priest was remembered by  friends, seminarians and clergy members in a Mass at the Redemptorist Church and a candle lighting ceremony at the stone marker in Tisa, which describes the kidnappers as agents of “the deposed Marcos regime.”

Cebu Archbishop Jose Palma called him a “modern martyr” and compared him to Archbishop Oscar Romero of El Salvador in Central America who was assassinated in 1980 and beatified by Pope Francis last May.

“Fr. Romano went beyond palliatives. He was particularly vocal and active with the exploited workers, slum dwellers, landless peasants, and other sectors of society oppressed by unjust structures,” said Palma in a circular sent to all priests and lay organizations in the archdiocese.

Archbishop Romero was shot dead by agents of the military while celebrating Mass.

“He (Fr. Romero) experienced the unjust structures used by the oppressors to exploit the poor. He spoke to denounce the oppressors, and announced the liberating love of Jesus of Nazareth,” said Palma.

“In a similar though different way, Fr. Romano also went beyond the palliatives. Both Archbishop Romero and Father Romano were privileged to follow the same fate as their crucified and murdered Master, Jesus of Nazareth,” the archbishop added.

“I pray that we would be as brave as Jesus, Blessed Oscar, and Fr. Rudy. May we also go beyond the palliative approaches in helping the poor. Together with them, may we also confront the structures that keep the poor exploited and oppressed,” he said.

Romano, a native of Samar, was a leader of the anti-Marcos movement in Cebu.

He was vice-president for the Visayas of the Bagong Alyansang Makabayan (Bayan).

In 1986, the Cebu City government installed a stone marker in barangay Tisa where Romano was abducted. The Cebu provincial government also passed a resolution “adopting Fr. Romano as a son of the province of Cebu” since the priest promoted human rights and rendered concrete assistance and social service to less-privileged Cebuanos.”

Fr. Tito Pascual, a Redemptorist priest, said some of his companions in the congregation want to process the beatification of Romano although nothing is formal for now.

He said they continue Romano’s fight for social justice by caring for the poor, including street children.

“Like Fr. Romano, we have to take care of those who are abandoned. We have to fight for justice,” Pascual said.