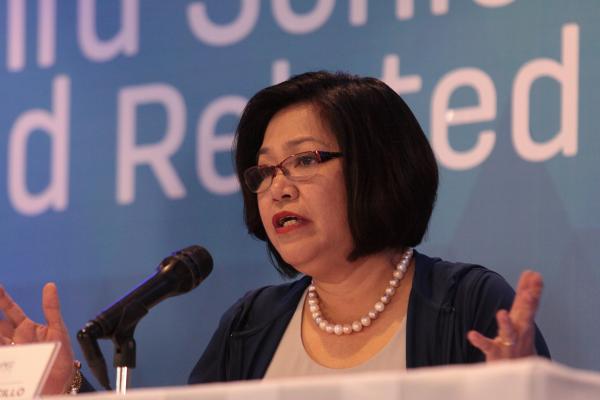 Department of Tourism regional director Rowena Montecillo says having APEC delegates in Cebu is a bonus that will boost the arrivals figures for Central Visayas region this year. (CDN PHOTO/ JUNJIE MENDOZA)

Even without the estimated 3,000 APEC visitors, the Department of Tourism (DOT) regional office is confident of hitting the arrivals target for Central Visayas this year.

“APEC is one program that was not in the pipeline for targets. With APEC, we got a bonus,” she said in a press conference earlier this week.

So far, she said the DOT is “on track” in terms of arrivals.

Cebu’s hosting of over 100 APEC meetings from Aug. 22 to Sept. 11 has created jobs and boosted revenues and sales of hotels, restaurants and retail establishments.

Montecillo said an APEC delegate spends an average of $100 a day on top of accommodation expenses.

Cebu, being a transshipment hub in central Philippines, accounts for the bulk of arrivals in the region.

The tourism department is looking to aggressively promote the province as a cruise destination as well as an ESL (English as Second Language) destination.

She said the Cebu Port Authority (CPA) plans to clear Pier 6, where cargo ships currently dock, and reserve this for cruise ships.

A proposed project to build an international container yard in Consolacion is awaiting approval by the national government. If approved, this should clear some space up at the Cebu International Port for the cruise ships, Montecillo said.

The DOT director also noted that several ESL schools have emerged in Cebu.

She said they were looking at convincing two big ESL associations to sell Cebu as a destination.

The tourism industry is expected to get a boost with the upgrading of the Mactan Cebu International Airport and the introduction of additional direct international flights.

“According to our market development group handling routes development, there will be more in Cebu this year,” Montecillo said.

Among those recently added are direct links to Osaka, Nagoya and Tokyo in Japan, she added. Additional links to Europe are expected.

Read Next
More exporters given chance to display wares