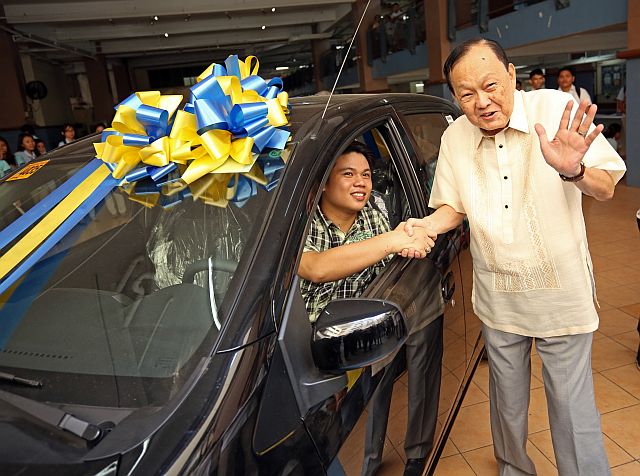 MICAH ARCEÑO 1ST PLACER /OCT.12,2015:Atty.Augosto Go President of University of Cebu wave as he shake hands with Mechanical Engineering 1st Place in Board Exam Micah Arceño at University of Cebu Campus during the turn-over of the key car.(CDN PHOTO/LITO TECSON)

WITH a wide smile, board topnotcher Micah Baculot Arceño received the keys to his brand new sedan from University of Cebu (UC) president Augusto Go.

Go said he was confident of Arceño’s bright future as the first placer in the board exams for mechancial engineering.

“He will have a lot of offers. As you can see, he is also a God-fearing man. We are really proud of him,” Go told reporters.

The university traditionally awards its topnotchers a brand new car. For Arceño, it was a black Toyota Wigo.

Arceño, 21, credited his performance in the recent Mechanical Engineering Licensure Examination to a steadfast faith in God and many late nights spent solving Math problems.

He said he was inspired to study hard after seeing the tarpaaulin poster announcing the accomplishment of 2009 UC graduate topnotcher Joseph Mayormita.

“If you believe, you will receive whatever you ask for in prayer,” Arceño said, quoting a Bible verse from Matthew 21:22.

One of his mentors, Rodel Naval, said he was confident Arceño would top the examination.

“UC is very lucky to have him. It’s hard to find students like him. We train them, but he just needed finishing touches,” Naval said.

He did not have it easy, he said. When he first came to Cebu, Arceño said he suffered from culture shock.

Although he had been a consistent honor student since grade school, Arceño said he had a hard time in his first two years in college.

“This isn’t sweepstakes. It’s not instant. You work hard for this to reap the fruit of your tears and blood,” Arceño said.

To sharpen his mathematical skills, he made it a habit to solve 100 problems each night.

He followed a more rigid routine when he started reviewing for the board examination by solving 300 questions daily about Math, power plants and machine design.

Arceño bested more than 2,000 board passers to top the two-day examinations with a rating of 88.45 percent.

Allegations that there was widespread cheating during the national exams did not bother him.

“I answered the exams honestly and I came prepared. Though it was the hardest exam for me so far, quoting my professor, I believe I did my part,” he told reporters.