Inmates to dance for Davide, Magpale 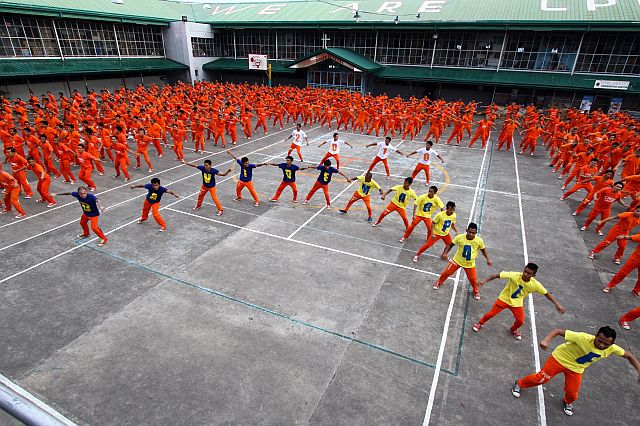 In the foreground, dancing inmates of the Cebu provincial jail wear yellow and blue shirts with letters that spell out “Davide” and “Magpale” in support of the reelection bids of both officials. (CDN PHOTO/TONEE DESPOJO)

Inmates of the Cebu provincial jail can’t vote for a governor or vice governor, but they will show their support for reelectionist Gov. Hilario Davide III and Vice Gov. Agnes Magpale through dance.
Wearing their orange prison uniforms and white sneakers, close to 900 inmates jumped, gyrated and clapped their hands to the song “New Thang” by American rapper Redfoo on Friday afternoon.
Dancers at the front wore blue and yellow shirts printed with letters that spelled out “DAVIDE, MAGPALE” and “2016”.
The public performance was viewed by the media and some foreign missionaries at the quadrangle of the Cebu Provincial Detention and Rehabilitation Center (CPDRC) in barangay Kalunasan, Cebu City.

Choreographer Vince Rosales said the campaign shirts came from funds of the inmates “pangkat” or brotherhood, fueled by various income-generating activities inside the jail.
He said they practiced their three-minute routine for one hour last Thursday, after they were told they were going to dance the following day. The media watched afternoon rehearsals. It was performed before regular visitors who arrived in the evening.
Support
Inmate Carlo Vitero, 34, said joined because he wanted to express his support for the Davide-Magpale tandem.
Detention prisoners – those whose cases are still being heard in court — still have the right to vote.But Vitero, like many other voters in the facility, are registered voters of Cebu City, which is not in the jurisdiction of the province of Cebu.
Vitero said he and other inmates can say living conditions in jail have improved since Davide sat as governor in 2013.
He was detained in 2010 on charges of illegal possession of drugs and murder, among others.
“We now have longer visiting hours and more visiting days. We have more activities inside, too. As a community, we feel even more bonded,” said Vitero in Cebuano.
Multiplier effect

Marco Toral, Capitol consultant on jail matters, said the dance was CPDRC’s contribution to Davide’s campaign.
“Even if the campaign period hasn’t started yet, we’ll go ahead,” he said.
He said while most inmates are city voters, they have relatives in different towns whose votes could help and have a multiplier effect.
Toral said Friday’s performance was a rehearsal for the campaign period which starts 45 days before the May 9, 2016 elections. He said it was a surprise for Davide and Magpale, who were not aware of the CPDRC special dance.
Would Davide approve? Toral said he’d like to think so.
The CPDRC inmates shot to to global fame when their performance video of Michael Jackson’s “Thriller” was uploaded on YouTube in 2007./Reporter Victor Anthony V. Silva