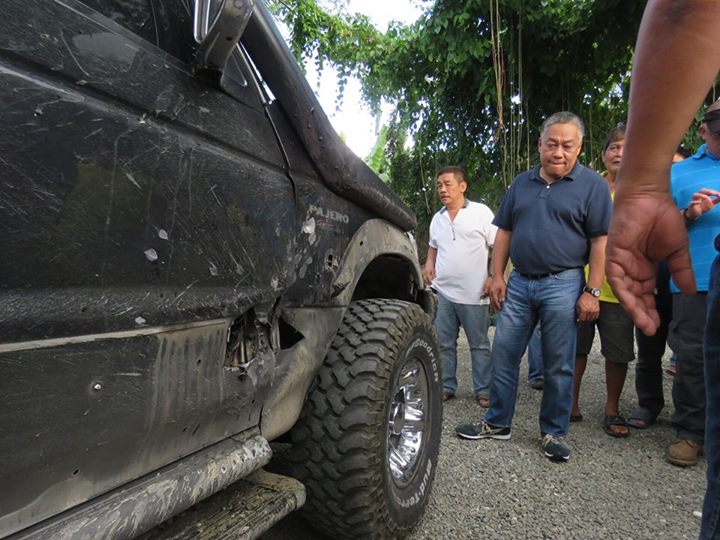 Gunmen strafed and lobbed a grenade at the parked vehicle of a Liberal Party (LP) candidate for vice mayor in Dumanjug town  in southwest Cebu yesterday.

No one was  injured and the grenade did not explode.

Gov. Hilario Davide III, who is also LP chairman for Cebu province, denounced the violence and called on everybody to “remain calm and observe the rule of law.”

“It is very unfortunate that there was an attempt on the lives of Vice Mayor Gica and his group while doing community visits,” said Governor Davide  in a statement sent to the media.

Gica, who is running for Dumanjug mayor against reelectionist  Mayor Nelson Garcia of One Cebu, said he could have been the target.

Police said this was possible while Garcia laughed it off as a “political gimmick.”

Gica and Asentista , both LP bets, were in the area to meet with supporters.

Asentista and two candidates for municipal councilor were busy shaking hands with residents of barangay Masa at a basketball court when the strafing  happened at about 1:30 p.m. yesterday.

Police said the gunmen may not have known that no one was inside the vehicle because its windows are tinted.

As of 6 p.m. last night, Dumanjug police  arrested  one man,  who allegedly acted as lookout for seven gunmen. Five suspects have been identified, police said.

Governor Davide said he has asked the police to conduct “an immediate and exhaustive investigation.”

“We shall inform the public once the report is ready and shall do what is right and proper with firm dispatch to bring the perpetrators to answer for what they have done,” he added.

Dumanjug, about two hours by car from Cebu City, was in the Commission on Elections (Comelec) watchlist in 2013.

“I think it will be included in the list for 2016 again. Even this early, something happened already. But as for now, we can’t tell yet whether it really is political,” said Provincial Board Member Christopher Baricuatro.

Dumanjug Police Chief Sr Insp. Arvi Arbuis said he would recommend that Dumanjug be listed as an election hot spot for next year.

Since the town has only 19 policemen, he said he will ask for additional troops from the Special Weapons and Tactics (SWAT) and Regional Public Safety Battalion (RPSB).

Arbuis said he sent a team to barangay Masa, about 20 kilometers from the town proper, after receiving a call at 1:30 p.m.

Someone texted the police station at 1:36 pm. saying  “Sir, tabangi mi diri sa barangay Masa kay gi-massacre me (Sir, help us here in barangay Masa because we are being massacred).”

Asentista went to the police station  past 5 p.m. to report the strafing of his vehicle. Based on the Dumanjug police blotter, no one was inside the vehicle at the time of the attack.

A photo of the vehicle was posted on Gica’s Facebook page showing  damage at the lower portion of the Pajero’s right front door.

Arbuis said they have not discounted the possibility that Gica was  the target of the attack.

Mayor Garcia, however, laughed off the incident and called it an “Ambush-me” operation.

“It was a political gimmick staged by Gica just to gain sympathy from the people,” Garcia said over radio dyLA.

He said a policeman who  served as Gica’s bodyguard staged the attack.

Sr. Insp. Arbuis, however, said he did not get a report about the policeman’s involvement. He said the policeman  is now assigned with the Provincial Police Safety Company (PPSC) based in another town.

Garcia also laughed off reports that the gunmen used an M79 or rifle grenade.

“If the vehicle  was hit by a  M79 rifle grenade, it would no longer run and would have exploded. But it was just dented,” Garcia said.

Asked what he would say if accusations pointed to him as the mastermind,  Garcia said it’s not his style.

“We didn’t do anything when my nephew was shot five years ago. Secondly, if Gica was the target, why wasn’t his vehicle hit? Why was it the vehicle of his running mate instead?  And no one was even hurt,”  he added.

Vice Mayor Gica, in a separate interview, said the LP group went to barangay Masa in a convoy including four vehicles, some motorcyles and a dump truck carrying some supporters.

He left ahead while Asentista, two candidates for municipal councilors and several supporters were still in the basketball court.