The 30-year-old Tillor, who missed last year’s edition of the annual race held in line with the celebration of the Sinulog Festival, crossed the finish line at the Cebu IT Park with a time of two hours, 43 minutes and 45 seconds. 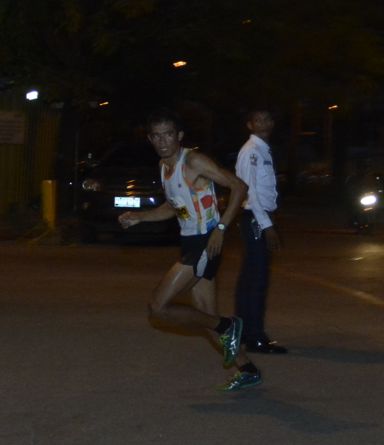 Tillor, a native of Bogo City, Cebu, skipped last year’s race due to lack of preparation. But yesterday, he was more than prepared as he was way ahead of his closest pursuer, Jeson Agravante, who finished second with a time of 2:47.48. Paul James Zafico finished third, clocking 3:01.19.

He said every time he races in the CCM, he always dedicates his performance to the Holy Child Jesus, locally known as Señor Santo Niño, whose feast is held every January.

“This is my vow every year to Santo Niño, especially every January for the Sinulog Festival,” Tillor said. “For me, I believe he helped me transform from an ordinary person to a very competitive athlete. I am a proud devotee of Santo Niño and I will do my best to join and compete in this race every year.”

Tillor admitted he encountered fatigue problems during the race, especially since he was coming from competing in three different full marathons within a month.

“I never thought that I will win the title this year because I was already exhausted. But I persevered and I surrendered everything to Sr. Santo Niño,” Tillor said.

In the women’s 42k local category, the visiting Silay City native Jennelyn Nobleza captured the elusive title she sought for many years as she crossed the finish line in 3:25.52, beating local favorite Ruffa Sorongon, who finished second with a time of 3:27.51. Lizane Abella placed third, finishing in 3:46.53.

The powerhouse Kenyan pack, meanwhile, were simply unchallenged in the 42k open division.

Both the men and women’s 42k open category were ruled by the visiting Kenyan runners with Eric Chepsiror topping the men’s race and Monica Nieru ruling the women’s category.

Around 3,600 runners joined the race yesterday, surpassing last year’s 3,300. The race was organized by both Run Rio and Cebu Executive Runners Club (CERC).

According to Rio dela Cruz of Run Rio, improvements has to be made with regards to the handling of traffic in some areas along the route after observing some glitches himself by running the 42k route yesterday.