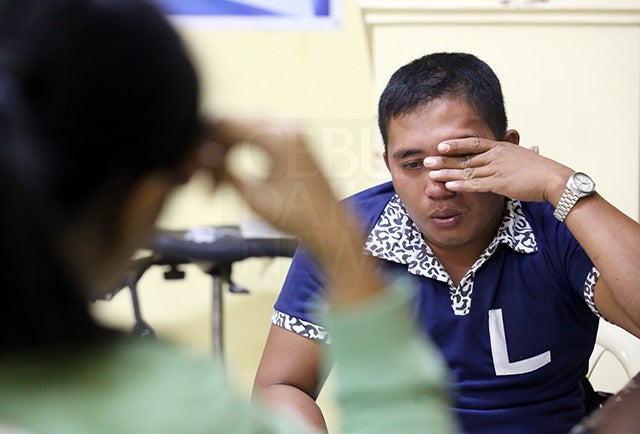 REMORSE. Taxi driver Bebiano Dapal, Jr. wipes his tears as he apologizes to a female passenger who accused him of demanding P2,000 from her after her nephew vomitted inside his vehicle. Dapal was fined P1,000 after a hearing at the office of the Land Transportation Franchising and Regulatory Board (LTFRB). (CDN PHOTO/JUNJIE MENDOZA)

The taxi driver accused by his female passenger of cursing her and demanding P2,000 from her was fined P1,000 while his employer was fined P5,000 by the Land Transportation Franchising and Regulatory Board (LTFRB).

Bebiano Dapal, Jr. and his employer CATZ Taxi operator Prelyn Intervencion profusely apologized to the female passenger during yesterday’s hearing at the regional office of the LTFRB.

Dapal was suspended by Intervencion a few days after the incident.

He was penalized under Joint Administrative Order 2014-01 issued by the Department of Transportation and Communications (DOTC).

Dapal was found guilty of overcharging and being discourteous and arrogant toward his passenger.

But LTFRB-7 legal officer Edwin Antepuesto said both parties agreed to reduce the fines to P5,000 for Intervencion and P1,000 for Dapal.

The 26-year old woman said she was willing to forgive Dapal for what he did but she felt insulted after Dapal cursed her mother.

Intervencion said it was stated in the contracts with the drivers that they should be polite to passengers.

“He has been with us for three years and so far this is the first time that we received complaints against him. We are not tolerating arrogant and discourteous drivers,” the operator said.

Intervencion also advised Dapal to be more patient with his passengers. Fines will be settled at the Land Transportation Office (LTO) after a temporary operator permit (TOP) was issued.

Dapal’s driver’s license was turned over to the LTO regional office.  He can only regain his license after he pays the P1,000 fine and undergoes a seminar at the LTO-7.

Photos of Dapal’s ID card and of his taxi unit were posted by the female passenger on her Facebook account along with her story of the incident.