The reigning champions San Miguel Beermen have more questions than answers when they face off against the surging Alaska Aces in Game 2 of the best-of-seven finals series of the 2016 Philippine Cup tonight over at the Smart Araneta Coliseum.

The biggest question mark remains to be the availability of Cebuano superstar June Mar Fajardo, who sat out the series-opener after suffering a knee injury in their clinching victory over Rain or Shine in the semifinals last week.

Though doctors have said that the reigning two-time MVP has a chance to play in the finals after test results showed no structural damage to his knee, it remains to be seen whether or not the product of the University of Cebu (UC) can indeed suit up for a Beermen squad that sorely missed him and his averages of 26.3 points, 14.9 rebounds, and 2.1 blocks.

Without the 6-foot-11 slotman, San Miguel got beaten black and blue by the Aces on the boards, 48-28, with the 28 rebounds being the lowest output for any team in the finals in league history. 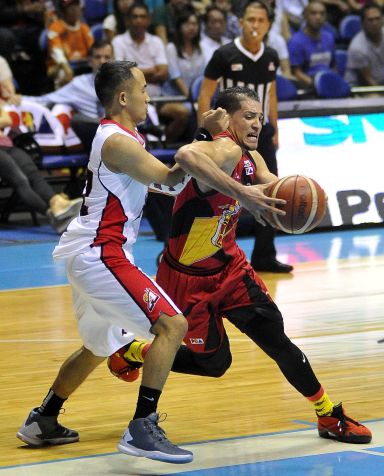 But Fajardo’s absence remains to be just one of the Beermen’s myriad of problems as they failed to hold on to a 12-point fourth quarter lead, no thanks to a spate of turnovers during a crucial three-minute stretch. The Beermen committed seven of their 18 turnovers in the final frame.

San Miguel led, 78-66, before Alaska overtook them, 93-91, after a Vic Manuel hookshot inside the last two minutes of the game.

Manuel proved to be the biggest thorn on the Beermen’s collective side as he scored a total of 24 points, 14 coming in the penultimate period.

Staying true to their “We Not Me” mantra, three other Aces scored in double-figures with Cyrus Baguio pitching in 16, Chris Banchero adding 15 and Calvin Abueva scoring 12 points and pulling down 13 boards.

However, Alaska remains wary of San Miguel in spite of their Game 1 success. Last season, Alaska won Game 1 but eventually lost the series and the title to this very same San Miguel squad, 4-3.

Read Next
NCAA volley finals on