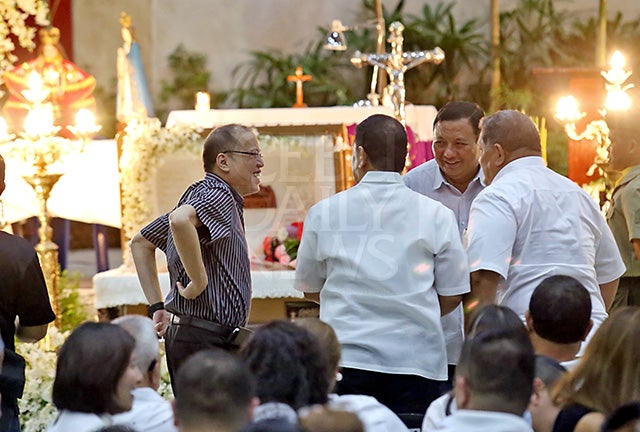 Aquino stayed for about 30 minutes to view Mendoza’s remains and speak to his children about how the founder of the Associated Labor Unions-Trade Union Congress of the Philippines (ALU-TUCP) helped improve the plight of workers in the country.

“We are grateful.  It is an honor and privilege that the president of the Philippines came to visit us,” said TUCP partylist Rep. Raymond Mendoza.

Aquino arrived at the Mactan Benito Ebuen Air Base on board a Learjet with body number 2910 about 11:15 a.m.  He was with Cabinet Secretary Rene Almendras and House Speaker Feliciano Belmonte.

Mendoza, 92, died on January 12.  His remains will be buried on Friday in a family owned property, the Papa Kit’s Marina and Fishing Lagoon in Liloan town in northern Cebu.

Upon his arrival at the Mariners’ Court, Aquino stood in front of Mendoza’s wake for a few minutes before he sat down with the labor leader’s children including Rep. Raymond Mendoza and ALU-TUCP national president Michael Mendoza for a brief conversation.

Raymond said in an interview after the president left that Aquino spoke of how their father contributed to improving the plight of workers in the country.

Aquino told them that their father only had 32 members when he founded ALU-TUCP that is now the biggest labor union in the country.

The president also recalled visits which he made to the Mendoza residence years back and mentioned of how big their family is.

Raymond told the president that his father has a total of 14 children and several grand children and great grandchildren.

Before he left, Aquino posed for a picture with the Mendoza family.

Aquino avoided media interview and left Cebu at about 2:50 p.m.

An official of the Philippine Information Agency in Central Visayas (PIA7) said Aquino begged off from granting media interviews because his Cebu visit was supposed to be a private visit to pay his respect for the late labor leader.

Read Next
Cebu City gets P85M final payment from SM