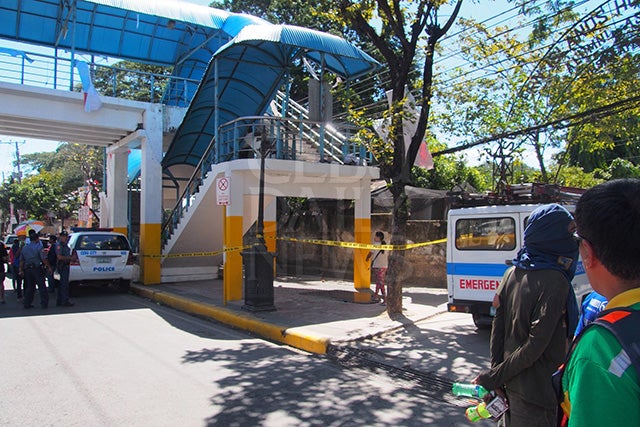 SEALED OFF. Police cordon the skywalk near the exit gate of Vicente Sotto Memorial Medical Center (VSMMC) on Osmena Boulevard, Cebu City, where a man fell after being jolted by a live wire of the Visayan Electric Co. (CDN PHOTO/CHRISTIAN MANINGO)

All that Noli Laborte Sisiban wanted was to get the Sinulog tarpaulin that was hung on top of the skywalk near a hospital’s exit along Osmeña Boulevard.

His daughter said he wanted to use the tarpaulin as a mat to protect himself from the cold asphalt near the foot of the skywalk, where he and his family sleep.

Determined to get the Sinulog tarpaulin, Sisiban climbed on top of the skywalk’s roof and used a barbed wire to remove it.

For his efforts, Sisiban got the shock of his life when a barbed wire he used got entangled with a live wire, jolting him.

As of 8 p.m. yesterday, he was in the intensive care unit of Vicente Sotto Memorial Medical Center (VSMMC).

Jeffrey Geagonia, an employee of a business process outsourcing (BPO) company, saw Sisiban as he lay on top of the skywalk’s roof, writhing in pain before he fell to the ground.

Clyde Maratas, a business development officer of Intellicare whose office is on the seventh floor of Metrobank Plaza, took a cell phone video of Sisiban, who was shown tilting to his left side before he fell.

The incident caused a power outage at the Fuente Osmeña area that lasted several hours.

“I was nervous when our glass windows turned orange. Others then rushed to the window,” Maratas told Cebu Daily News.

He said the incident occurred at 11:35 a.m. yesterday.

Sisiban’s accident came on the heels of a similar incident involving two boys at the same skywalk last week. The boys were allegedly trying to steal the high voltage wires.

The Visayan Electric Co. (Veco) said they were investigating the incident.

“It’s a different wire but in the same area. That wire that the two teenage boys tried to steal was already secured by our crew last week. We suspect that Sisiban was holding something like a metal that came in contact with the wire that’s why he got electrocuted. That’s how sensitive the wires are. The line really tripped which caused power loss in the area for a short while,” Verallo said.

Maratas recalled that he and fellow employees peeped through the window and saw a portion of the skywalk’s blue roof turn black.

“We thought no one was there and it was just a plain tarpaulin that got burned. But when we checked, it was not a tarpaulin but a man who got electrocuted,” Maratas said.

Maratas said they called the Emergency Rescue Unit Foundation (ERUF) and they learned that Sisiban was unconscious at the time.

He said they saw Sisiban suddenly move his head and hands.

“He hardly moved his limbs. We screamed every time he moved because the roof of the skywalk is curved and he might fall,” he said.

Maratas’s video showed that traffic got snarled after people saw Sisiban on top of the skywalk.

“When he fell, I heard everyone scream. There were people who rushed to him and responded,” Maratas said.

Sisiban, a resident of Labangon, sustained severe burns and was rushed by a medic to the nearby Vicente Sotto Memorial Medical Center.

Geagonia said he just bought some mineral water at a nearby store when he saw Sisiban trying to remove the Sinulog tarpaulin on top of the skywalk. He then heard two loud explosions.

He said he saw Sisiban turn black and his clothes burn to a crisp.

“I saw him pounding the roof and waving his hands to get the crowd’s attention, trying to call for help. But nothing can be heard from him,” the 39-year-old Geagonia told Cebu Daily News in Cebuano.

Geagonia said Sisiban lay on the roof for five to 10 minutes before he fell off the skywalk.

Geagonia said Sisiban was nearly naked when rescuers carried him on a stretcher to the VSMMC.

A small trace of blood can be found near the hospital’s concrete fence. The area was immediately cordoned by the police.

Verallo of Veco told Cebu Daily News that initial reports they received from their crew showed that Sisiban wasn’t tasked to remove the tarpaulins hung on the top of the skywalk.

“I got a report from our safety team. Sisiban was removing tarpaulins which he didn’t own and he was on top of the skywalk where he got in contact with our wire and got electrocuted,” she said.

Asked if Veco has any liability in the incident, Verallo said “if he was trying to steal the tarpaulins and that his removal of the tarpaulins was not authorized, then we’ll have no liability.”

“Usually if it’s an authorized removal of the tarpaulins, we get a written request for us to install conductor covers for protection,” she said.

“It is Veco’s stand that if we are liable, meaning there was a request and we did not act on it, then we will shoulder the cost,” she added.