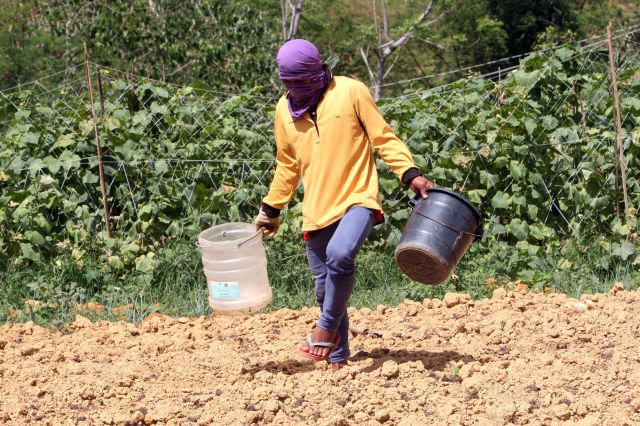 A farmer in barangay Sudlon II, Cebu City fetches water for his plants in this April 2015 file photo.

PLANS to conduct cloud seeding to offset the El Niño dry spell were considered by Cebu province and the Department of Agriculture (DA-7), but a top DA official said it needs further study.

“Based on experience, the rain usually falls into the ocean when we conduct cloud seeding,” Elumba said.

The DA-7 in tandem with the Bohol provincial government, conducted three cloud seeding operations in the province earlier this month as part of efforts to mitigate the effects of the El Niño phenomenon.

He said 70 percent of rice production in Central Visayas is in Bohol which has large irrigation dams.

“If there’s a big chance of rain, the crops will get watered and the dams will be filled,” Elumba said.

Bohol received the largest share of the DA’s allocation for El Niño mitigation at P48.1 million, followed by Cebu at P7.98 million, P5.8 million for Negros Oriental and P1.6 million for Siquijor.

For cloud seeding operations to be conducted in Cebu province, Elumba said his office needs an endorsement from the provincial government.

“We haven’t received any report from the Capitol yet. They haven’t issued an endorsement. We will have to wait,” said Elumba.

Water supply is running low in the towns of Borbon in the north and Dalaguete in the south due to the prevailing dry spell caused by the El Niño phenomenon.

Cloud seeding, the dropping of crystalline substances like silver iodide or dry ice (solid carbon dioxide) into clouds to cause rain, is intended to boost water levels of irrigation facilities and dams when supply becomes low.

Elumba said the provincial government, municipal governments, Air Force and the Department of Science and Technology (DOST) will coordinate for the activity.

However, he added that there hasn’t been a formal endorsement from the Provincial Board (PB) yet.

He met with DA-7 representatives about one week ago to discuss the initiative, but details haven’t been finalized.

Saragena said the P7.98 million allocated by the DA for the province will be used to purchase poultry and livestock vitamins and antibiotics as well as to repair small water impounding facilities and irrigation canals for rice paddies.